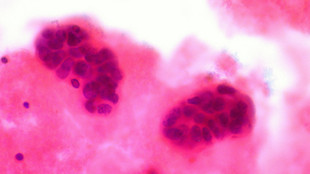 Metastatic breast cancerFLICKR, ED UTHMANResearchers from Arizona State University in Tempe have created an inexpensive blood test that can detect several common cancers based on the immune responses they evoke. They used arrays of randomly generated peptides to bind antibodies from human blood samples belonging either to healthy controls or to people with one of five different cancers. Based on the binding patterns—or immunosignatures—the researchers were able to distinguish between all five cancer types. The team also used another array of randomly generated peptides to differentiate among a broader range of cancers and other diseases. The results appeared today (July 14) in PNAS.

“The idea is elegant, but there are clearly things missing,” said Antonia Vlahou, a clinical proteomics researcher at the Biomedical Research Foundation of the Academy of Athens in Greece who was not involved in the study. But she said that it was unclear...

“I have to admit it sounds almost too good to be true,” said Harald Mischak, who studies proteomic biomarkers at the University of Glasgow.

Phillip Stafford, who led the work, is an immunologist and biochemist at Arizona State University. He acknowledged that it is unclear exactly which antibodies determine the signature of each cancer, but argued that his team’s approach is nonetheless effective.

The researchers obtained two sets of more than 10,000 random peptides to screen for unique antibody patterns in cancer patients’ blood. Traditionally, biomarker tests are based on a more limited number of peptides and antibodies, but Stafford said that using a greater variety appears to be more effective. “Unless you are absolutely positively sure you know what the target is, it’s futile to try to guess—or second-guess—what protein is going to make your immune system respond.”

To generate its peptide arrays, Stafford’s team used a random number generator, creating peptides with 17 varying amino acids, plus three standard ones, for structural purposes. Cancers produce proteins and other biomolecules that are unlike those produced by healthy cells. The patient’s immune system mounts a response against these unfamiliar molecules, releasing antibodies that bind to the peptide array and generate an immunosignature.

To determine the immunosignatures associated with certain diseases, Stafford and his colleagues assembled blood samples from 20 people each with breast cancer, pancreatic cancer, multiple myeloma, glioblastoma, or  esophageal cancer, as well as from 20 controls. The team used these samples to develop reference immunosignatures for each malignancy. The researchers then evaluated 120 more blood samples from a different set of people with the same diseases, finding that they were able to make the correct diagnosis 95 percent of the time.

To further test their immunosignature system, the researchers used nearly 1,500 samples from healthy controls and people with 14 diseases, including several types of breast cancer as well as non-cancer diseases such as pancreatitis. They used around three-quarters of the samples to train a second randomly generated peptide array. They then tested their ability to assess the remaining samples from people with the same set of diseases, determining the correct diagnosis more than 98 percent of the time.

Stafford said that the company HealthTell, for which he is a consultant, is developing diagnostic tests based on his team’s technology. The Chandler, Arizona-based company plans at least at first to market these tests directly to consumers.

But Vlahou and Mischak argued that such a general cancer screen has limited clinical relevance, as doctors tend to test specific at-risk populations rather than the general population. Vlahou said that doctors would be more interested in validating biomarkers to differentiate between bladder cancer and benign bladder conditions, for instance, rather than administering a catch-all cancer test. “I don’t think finding a multi-cancer test is going to make a clinical impact,” she said.

“In the end it may turn out that what they report is true, but one should at least be skeptical,” said Mischak.