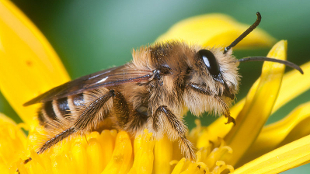 WIKIMEDIA, LUIS MIGUEL BUGALLO SANCHEZIn the last half century, the domesticated honeybee population has declined by about 50 percent. In the United States, this year marks the highest losses of honeybee populations, with some of the biggest beekeepers losing more than 60 percent of their insects. But identifying the culprit has proved daunting. Pathogens, parasites, pesticides, and habitat loss are likely involved. Recently, the potential role of neonicotinoid pesticides has taken center stage, as a flurry of studies has yielded conflicting findings—and the controversy is getting political.

Earlier this year (January 31), the European Commission proposed a 2-year ban on neonicotinoids in the European Union (E.U.) to give researchers more time to determine the effects of the pesticides on the continent’s bee populations, but nine of the 27 EU countries voted down the proposal—enough to keep it from being enacted. The Commission is not giving up however, and has...

Neonicotinoids—“neonics”—are systemic pesticides broadly used in Europe and the United States. Absorbed by plants from the soil, they eventually reach the pollen and nectar, which is ingested by bees and other insects. Last year, research demonstrated that even low levels of neonics can strongly affect bee behavior. In one study, bumblebees that were exposed to the neonic imidacloprid in the lab, then allowed to forage in the field, had sharply reduced colony growth rates and produced 85 percent fewer queens to found new colonies in the spring. In another study, more than 30 percent of free-ranging honeybees exposed to the neonic thiamethoxam got lost, failing to return to the hive.

The papers were “the straw that broke the camel’s back,” said David Goulson of the University of Stirling in the U.K., a coauthor of the bumblebee study. Previous research implicating neonics in bee decline had been done entirely in the lab. “We wanted to see what happens when the bees have to navigate over realistic distances, find patches of flowers, and bring the food back to the hive,” he said. “We found really striking results.”

So striking that the U.K.’s Department for Environment, Food and Rural Affairs (DEFRA) decided to reevaluate existing publications. But the agency concluded last month that “the risk to bee populations from neonics, as they are currently used, is low.” Moreover, DEFRA’s own research, also released last month, stated that “laboratory-based studies demonstrating sub-lethal effects on bees from neonics did not replicate realistic conditions, but extreme scenarios.”

But many researchers disagree. “We used exactly the levels found in a treated crop in the field,” said Goulson. Suggesting that the experiments linking neonics to bee decline use doses that are unrealistically high is “part of the smoke screen of lies and confusion that have been thrown up by the agrochemical industry” to defend the use of neonics, he added.

Indeed, DEFRA’s study was harshly criticized. “It’s the most embarrassing, non-scientific piece of rubbish I’ve ever seen,” said Christopher Connolly of the University of Dundee, U.K. He cited contaminated sites and lack of controls; inconsistencies of experimental locations, times of the year, and colony sizes at start; and lack of peer review. “Despite the lack of scientific validation, this study has been used as evidence by DEFRA to trump previous credible peer-reviewed studies,” Connolly said.

Independently, the European Commission asked the European Food Safety Authority (EFSA) to also review the existing literature on neonics, specifically Syngenta’s thiamethoxam and Bayer’s clothianidin and imidacloprid. EFSA’s report, released this January, concluded that neonics pose an unacceptable risk to bees and that they should not be used on flowering crops. This prompted the E.U.’s ban proposal and fevered campaigning from both sides of the debate.

The industry is pushing back, however. In a February statement, Syngenta called EFSA’s report “fundamentally flawed,” and warned that a ban would bring “considerable economic harm to growers and absolutely no benefits to bees.” An economic analysis, funded by Bayer and Syngenta, estimated that a ban would cost the EU economy €4.5 billion ($5.78 billion) per year due to declining yields and subsequent losses of farm jobs. But, after France and other countries partially banned neonics at the turn of the century, “crops didn’t collapse, and people didn’t turn to more dangerous pesticides,” Goulson argued. “There’s very little evidence that crops yield benefits from using neonicotinoids.” Indeed, a ban might actually increase yield by boosting the numbers of bees to pollinate the plants; one study suggested that insect pollination increases seed yield and the market value of oilseed rape (canola) by 20 percent over plants pollinated only by wind.

Meanwhile, the evidence against neonics continues to accumulate. In a report released last October, Nigel Raine of Royal Holloway, University of London, and colleagues studied the effects of pesticides at sublethal concentrations, and in realistic combinations, on bumblebee behavior. Chronic exposure to the two pesticides tested dramatically impaired bees’ foraging ability and increased worker bee mortality, putting the colonies at high risk. But it took 2 weeks for differences in behavior to emerge. “The way pesticide risk assessment happens is often very short term—24 to 48 hours—and it’s tested only in honeybees,” said Raine. “We need to improve that.”

Another study by Sally Williamson and Geraldine Wright of Newcastle University, U.K., also found that realistic levels and combinations of pesticides strongly affected learning and memory—again, with serious implications for colony survival. And in yet another report, Connolly and colleagues found that intact honeybees’ brains exposed to the same levels and combinations used by the Newcastle University group caused neuronal inactivation and loss of function in the mushroom bodies—an area involved in learning and memory. “At the relevant concentrations we used, these honeybees will not be able to learn efficiently,” said Connolly.

But the results were dismissed by Bayer’s communications and government affairs manager, Julian Little, who disingenuously suggested that if you give an insecticide directly to an insect, he can guarantee it will have an effect. Last month, Syngenta and Bayer proposed a plan to unlock the stalemate on bee health, including adding new flowering margins around fields to provide pesticide-free bee habitats, monitoring for the presence of neonics in crops, and conducting more research into the impact of bee parasites and viruses on bee decline.

“There are obvious parallels with the tobacco industry,” said Goulson. “For 50 years they insisted that smoking wasn’t harmful to human health, even when the scientific evidence piled up, they still claimed there was no link. And they funded scientists to come up with spurious studies, which seemed to back them up. Here, the scientists funded by the [agrochemical] industry are the only ones that stand up and say, as far as we can tell, there’s no effect of these pesticides on bee health. I can’t help but being highly cynical about the independence of any of that [research].”

Correction (April 11): This story has been updated from its original version to correctly reflect that Nigel Raine of Royal Holloway, University of London, and colleagues studied the effects of pesticides on bumblebees, not honeybees. The Scientist regrets the error.