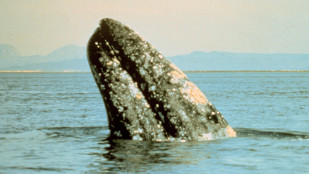 WIKIMEDIA, NOAAWhales that exploit deep, dark ocean waters often rely on acoustic communication. The deep sea has been relatively quiet for millions of years, but now a cacophony of human activities, including seismic surveys for oil and gas, is adding noise to the underwater soundscape. That’s led to increased interest in understanding how to measure and mitigate the disruptive impacts of all this extra noise on whales, particularly those that  use low-frequency sound—similar in frequency to that used in seismic surveys—for echolocation.

Duke University oceanographer Doug Nowacek and his colleagues have analyzed evidence on the effects of seismic surveys on marine mammals accumulated over four decades, which when combined with their own studies near the Russian coast north of Japan, they’ve used to suggest approaches for seismic surveys in environmentally sensitive areas. Their work and recommendations were published in Aquatic Mammals today (January 19).

Carl Gustaf Lundin, director of the...

Analogous to whale echolocation, seismic surveys use loud bursts from airguns towed behind boats to recreate details of seafloor shape and geology, allowing researchers and prospectors to detect pockets of oil and gas reserves. The impacts of such underwater noise on marine mammals is highly variable and site-specific, influenced by biological, oceanographic, and geophysical factors, thereby precluding a one-size-fits-all mitigation strategy. So Nowacek’s team—which included investigators from academic and government labs, the oil and gas industry, consultancies, and the International Whaling Commission—sought to consider all of these factors in their recommendations.

Individual pulses of sound can be damaging for whales very close to the seismic survey array, explained Nowacek, but it’s repeated exposure at low levels that’s of greater concern. “These animals receive pulse after pulse after pulse, because these things are produced every 10 or 15 or 20 seconds during a survey of days to weeks to months,” he said. “Repeated exposure can accumulate in the auditory system and cause damage.”

From their analyses, Nowacek and his colleagues produced a “roadmap” for mitigating the potentially harmful effects of survey activities on whales. The researchers concluded that the best way to reduce, minimize, or even eliminate negative impacts of seismic surveys on marine mammals is to separate them in time, space, or both. However, they noted that in high latitudes where sea ice occurs, the overlap in timing of whale feeding and optimal surveying conditions can make separation a challenge.

Study coauthor Greg Donovan, who is chair of the IUCN’s Western Gray Whale Advisory Panel and head of science at the International Whaling Commission, said that this work highlights the importance of  transparency to make sure mitigation measures are working. “If we shared all of the data, we would make so much more progress in a smaller space of time,” Donovan said.

Daniel Zitterbart of Germany’s Alfred Wegener Institute for Polar and Marine Research said he found most of the team’s recommendations to be valid. Zitterbart, who was not involved in the work, explained in an e-mail that the study lends support for the practice of conducting ocean exploration when few or no animals are present.

Dalhousie University’s Lindy Weilgart, an expert on whale vocal behavior, told The Scientist in an e-mail that while she agrees with some of the report’s recommendations, “they are pretty tepid and don’t go nearly far enough.” The most glaring omission, she said, was the lack of a recommendation to use airgun alternatives, such as Marine Vibroseis, which is a potentially viable, much quieter option that’s already available for use in shallow water.

Overall, though, Zitterbart said the study provides a good overview of what’s required for “conducting a seismic cruise which will help conservationists, oil companies, and regulating agencies to reconsider their current state of the art.”