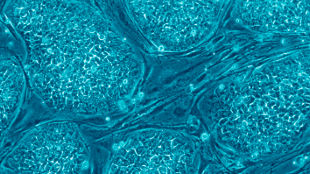 WIKIMEDIA, NISSIM BENVENISTYThe existence of very small embryonic-like stem cells (VSELs) has been hotly debated by scientists since they were first reported in mouse bone marrow in 2005. The cells were later identified in human blood and bone marrow as well, and have been proposed as a viable alternative to mouse and human embryonic stem cells (ESCs) in research and medicine. But a study published today (July 24) in Stem Cell Reports has called the very existence of VSELs in question, with the senior author deeming them a “distraction.”

“The results cast strong doubt on the existence of pluripotent VSELs in the bone marrow,” said Martin Pera, chair of Stem Cell Sciences at the University of Melbourne in Australia, who was not involved in the study. “Many previous reports claiming to identify pluripotent stem cells in adult tissues have similarly failed to stand up to careful scrutiny.”

In light of such conflicting results, Irving Weissman of Stanford University School of Medicine and his team set out to replicate the original finding of VSELs in mouse bone marrow, using the most rigorous protocols yet. They focused on identifying candidate VSELs by using the characteristics of size, phenotype, and pluripotency markers, but failed to find any cells that fit previous VSEL descriptions.

The researchers found that the vast majority of events matching the estimated size of VSELs actually appeared to be artifacts, such as dead cells and debris. The team tested the remaining “exceedingly rare population” of cells that matched the VSEL profile for pluripotency markers without luck.

“The claims about VSELs were not yet replicated by independent scientists,” said Weissman. “We redid the experiments as they have been described and could not confirm what was claimed.”

Despite the new findings, Ratajczak stands by his work and the existence of VSELs, noting some methodological concerns about the current study. Furthermore, he remains optimistic about VSEL potential for regenerative medicine. “Based on very encouraging data, we predict that these cells could become an alternative for induced pluripotent stem cells and ESCs,” he said in an email to The Scientist.

Ratajczak suggests that there may be good reason the scientific community is reluctant to accept VSELs.  “Cells we have discovered in adult tissues change several dogmas in stem cell biology and challenge some patents as well,” he said. Indeed, Weissman noted that because VSELs have been proposed as an “ethical” alternative to ESCs, the debate over their existence goes beyond the questions of science. If VSELs do exist, he said, “it would mean that in all of regenerative medicine eventually the donor of stem cells would be a cell line, not a living person or an organ donor.” However, in light of the current findings he called VSELs a “distraction” that has caused researchers to spend a lot of time on trying to replicate results that are “sadly” not reproducible.

“In a rapidly evolving field, exciting and provocative early stage findings can often be subject to over-interpretation,” agreed Pera. “This work shows that it is absolutely critical for multiple laboratories to confirm rigorously the developmental potential of candidate stem cells, before a new finding is accepted as dogma, or forms the basis for science policy decisions.”