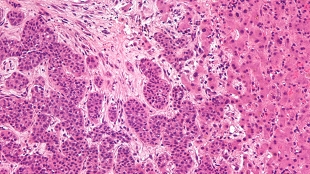 Liver metastasis. Wikimedia, Nephron.A literal window into the insides of mice is giving scientists a peek at the accumulation of cancer cells in organs deep within the body. Watching through a transparent coverslip surgically implanted into the animals’ abdominal cavities, researchers in The Netherlands identified a transition that takes place as cancer cells go from a mobile state in which they infect new organs to a non-migratory state that allow the cells to multiply and establish new tumors. The new technique, published today (October 31) in Science Translational Medicine, will help shed light on the important early steps of metastasis and possibly enable to the development and screening of metastases-targeted drugs.

“Metastasis is the big question in cancer right now, and so little is known of the early and late steps,” said Zena Werb, a molecular biologist at the University of California, San Francisco, who did...

“Metastatic sites that are most interesting are deep within the body, making it hard to find out what’s happening at that stage when metastases are 2, 3, 4 cells in size,” explained Erik Sahai, a tumor cell biologist at the Cancer Research UK London Research Institute, who did not participate in the study. A window into a highly-metastasized organ, like the liver, gives researchers insight into the process by which cancer cells establish in new sites after leaving the primary tumor—“not an easy question to tackle,” said Sahai.

Previous efforts to visualize metastases in living organisms relied on skin flaps—peeling back a section of skin and using a microscope to image fluorescently labeled cells inside a mouse. After each imaging session, the skin can be laid back down, and re-peeled for another round of imaging. “It’s minimally invasive to the mouse,” noted Robert Hoffman, whose group at the University of California, San Diego has used this technique to examine metastases in the liver and pancreas. But it does require performing minor surgery to re-open the skin flap each time, while an imaging window requires only a single, rather more invasive surgery, said Hoffman, who did not participate in the current study.

To simplify the process, Jacco van Rheenen and Laila Ritsma at the Hubrecht Institute removed a section of the mice’s abdominal cavity wall altogether and inserted round glass coverslips surrounded by a bio-compatible titanium rings, securing them to the surrounding flesh with sutures and tissue glue. Other imaging windows have been used to examine metastases on the lung and brain, Sahai noted, but the new windows, which peer directly onto the mice’s livers, are much less bulky, allowing the mice to move normally without disrupting the coverslips, which can remain in place for weeks. Because surgery only occurs once, risk of infection is also reduced, said van Rheenen.

In order to visualize the metastatic process, Ritsma and van Rheenen injected colorectal cancer cells expressing fluorescent markers into the spleen. The cells then entered the blood stream and spread throughout the body, including to the liver. Watching the cells move into the liver and grow into new tumors, the researchers saw that early on, when the cell clusters were still very small, the cells were active, moving and protruding from the cluster. But after the clusters increased in size, the cells became stationary.

Using inhibitors to block cellular movement early in the process reduced the growth rate of the clusters and decreased the number of larger clusters later on, suggesting that this early movement is an important process in successful metastasis.

Cell movement and invasion of tissues surrounding the primary tumor is a first step for metastatic cells heading to new locations, so the evidence that a similar process takes place as cells grow in new sites “gives some optimism that strategies developed to tackle invasion at the primary tumor site might have applicability even once cells arrive at a secondary site,” said Sahai.

Hoffman pointed out, however, that the particular cancer cell line used in the new study metastasizes relatively easily. “I would like to see a comparison between [these] cells and a related cell line that doesn’t metastasize so well,” he said. Poorly metastasizing cells might be less motile, for example, or, as seen in other models, they might have higher rates of death after seeding the liver.

The abdominal windows may also help researchers examine therapies designed to target metastases, and investigate why some treatments don’t work as well as expected, said Sahai. “Using these approaches, we can see what’s going on, and why some drugs might be failing.”

Van Rheenen and his colleagues are currently tackling another unanswered question of cancer metastasis: why, when so many cells break away from primary tumors and filter though the liver, do so few take up residence? One possibility, said van Rheenen, is that only cancer stem cells, and not more terminally differentiated cells, are capable of establishing new tumors. (Read more at “Are Cancer Stem Cells Ready for Prime Time?” The Scientist, April 2012.)

“A thousand cells arrive per day,” explained van Rheenen. “It’s a black box why most don’t make it.”