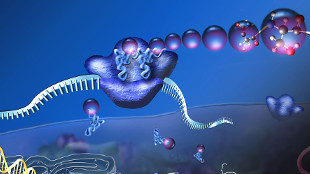 Ribosome translating mRNAWIKIMEDIA, NICOLLE RAGER, NATIONAL SCIENCE FOUNDATIONInterruption of the protein translation machinery as it reads a messenger RNA (mRNA) transcript is rare but problematic. A new study in Science Advances today (July 24) reveals that one cause for such arrest is the mRNA sequence itself—specifically, strings of multiple adenosine (A) nucleotides. Although such translation stalling on poly(A) stretches had been observed previously, it was thought that the encoded amino acids were to blame. The finding that in fact the nucleotides are responsible could have important implications for gene mutations previously considered silent, or synonymous.

“That it’s really the RNA sequence and not the protein sequence which is important—that was a serendipitous finding, and what’s beautiful . . . is that they followed it up,” said cell and molecular geneticist Jonathan Dinman of the University of Maryland who was not involved in the work. “They were looking for...

Ribosomes, the proteins that read the codon sequences of mRNA transcripts and translate them into amino acid chains, occasionally stall. And when they do, the general result is degradation of both the mRNA and the unfinished protein. There are several reasons for ribosomal arrest, including mutations to the mRNA sequence or impassable secondary structures formed by aberrant folding of the RNA. However, stalling is also thought to occur if a ribosome encounters a stretch of mRNA encoding multiple basic amino acids—such as arginines or lysines—or if it misses the stop codon and inadvertently translates a transcript’s poly(A) tail—a noncoding sequence that protects and helps transport mRNAs, but which would code for multiple lysines if translated.

One theory was that the combined positive charges of the basic amino acids cause an interaction with the ribosome’s negatively charged exit tunnel, through which the growing peptide chain emerges. Essentially, “they get stuck,” explained Dinman, “It constipates the ribosome.“

But Rachel Green at Johns Hopkins University School of Medicine and her colleagues made a strange discovery. They found that bacterial ribosomes were more prone to pausing on strings of lysines if they were encoded by AAA codons than by AAG codons. “That was really puzzling and . . . to be honest, it was a surprise for us,” said Sergej Djuranovic, who was previously a postdoc in Green’s lab and is now an assistant professor of cell biology and physiology at Washington University in St. Louis. “Nobody had really looked at the differences between mRNA sequences, or codons, for the basic amino acids,” he said.

“There’s a growing body of evidence to suggest that there can be significant pauses in translational elongation,” said RNA molecular biologist Jeff Coller of Case Western Reserve University who also was not involved in the study, “and in this case what they’re saying is that there are intrinsic features to the ribosome such that it has difficulty with certain stretches of nucleotides—that is, with poly(A).”

Bioinformatic analyses of vertebrate genomes revealed that in genes containing stretches of as few as three lysines in a row, the chance of these lysines being encoded by multiple AAA codons was significantly less than the chance of them being encoded by AAG codons. This suggested that poly(A) sequences have been evolutionarily selected against, as would be expected if they do indeed cause ribosomes to stall.

The results also suggested that apparently silent mutations in stretches of poly-lysines—those that alter codon sequences but not amino acids—might not be so silent after all. Indeed, Djuranovic’s team showed that in poly-lysine stretches of actual human genes, mutating AAG codons to AAA codons consistently decreased protein expression and mRNA stability, while mutating AAA codons to AAG had the reverse effect. “People often think of synonymous mutations as something that is not harmful,” said Djuranovic, “but, what we’re implying is actually if you mutate this motif [row of lysine codons], you may deregulate these genes.”