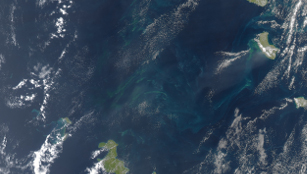 Massive bloom or surface aggregation of Trichodesmium near New Caledonia in the tropical Pacific Ocean, as viewed by a satellite from space (long brownish streaks are the bloom; white objects are clouds)NASAA key phytoplankton can adapt metabolically to long-term high carbon dioxide (CO2) levels, and those adaptive changes can become permanent, according to a study published today (September 1) in Nature Communications. Researchers at the University of Southern California (USC) and the Woods Hole Oceanographic Institute in Massachusetts grew Trichodesmium erythraeum, a cyanobacterium common in oceans, in carbon dioxide levels that mimicked the projected atmospheric levels in 2100—approximately double the current levels—for four-and-a-half years. The cyanobacteria responded with increased growth and higher nitrogen fixation rates. When returned to lower CO2 levels, the T. erythraeum did not decrease their growth or nitrogen fixation rates.

“They couldn’t come back to the lower current rate. They...

T. erythraeum is widely distributed in the world’s oceans and is important to the marine food web because it fixes nitrogen, making the element available to other organisms in the ocean. Previous studies had demonstrated that phytoplankton respond to high CO2 levels with high growth and nitrogen fixation, but those studies were relatively short-term, lasting a few weeks.

Hutchins and his colleagues used experimental evolution to study the cyanobacterium under a variety of environmental conditions. “It’s an elegant study because they’re really using a timeline that’s appropriate to the question and I think that nuance of this paper sets it apart from many other papers,” said Ruth Gates, a marine biologist at the University of Hawaii who was not involved in the study. “They did 850 generations over the four year period. That’s huge—they’re difficult experiments to do.”

The team hopes to understand what’s driving these adaptations of the high-CO2-adapted cyanobacteria by studying mutations and protein expression in these strains. “We want to know, mechanistically, what’s causing this really bizarre evolutionary response,” Hutchins said. The researchers also plan to examine the role that iron, another key limiting nutrient, may play in metabolic adaptations to elevated CO2 levels.

Although the team focused on a major predicted change in oceans, Hutchins noted that global climate change due to human activity will have a much wider range of effects on the ocean.

Elena Litchman, a microbial ecologist at Michigan State University, said that temperatures will rise along with CO2, and food web structures will change. “They subjected the species to just one stressor, and the future ocean isn’t just going to be one stressor. Future evolutionary studies would have to include two stressors acting together in different directions,” said Litchman, who was not involved in the work.

Hutchins noted that similar evolutionary experiments of key organisms in both ocean and terrestrial systems would provide important insights for how microbes could respond to global climate change. “This [microbe] is doing something we could never have predicted,” he said. “There are so many microbes that drive the nutrient cycle functions of the world. What about all these other ones? Are they going to things that are unexpected in response to anthropogenic change?”