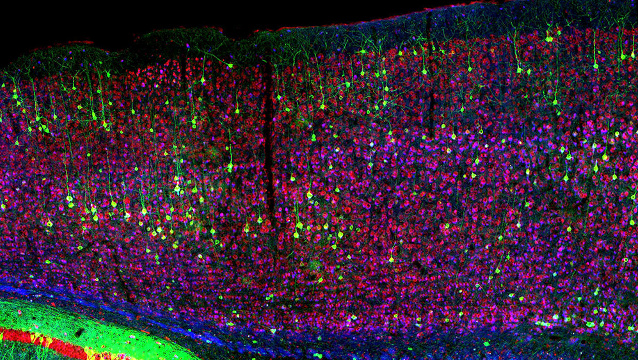 FLICKR, NATIONAL INSTITUTE OF CHILD HEALTH AND HUMAN DEVELOPMENTTransplanted embryonic neurons can properly connect into the developed visual cortex of adult mice and improve the animals’ sensitivities to visual cues over time, scientists reported today (October 26) in Nature. By demonstrating that added neurons can become fully functional in circuits that normally do not rewire in adulthood, the team’s results suggest that the brain may be more plastic than previously thought.

“For the first time, the authors show that we can visualize and analyze in vivo maturation and integration of grafted neurons at the level of individual cells,” said neuroscientist Afsaneh Gaillard of the French National Institute of Health and Medical Research (INSERM) and the University of Poitiers, France, who was not involved in the research.

Magdalena Götz of Ludwig-Maximilians University and the Institute of Stem Cell Research at the Helmholtz Center in Munich, Germany, initially wanted to...

The researchers ablated neurons in an upper layer of the visual cortices of adult mice—a brain region where connectivity and function are particularly well understood—and transplanted in neurons from the embryonic cortex. Next, using two-photon microscopy, they tracked the development of the transplanted neurons over time. The scientists watched the transplanted neurons transform into adult pyramidal neurons over the course of a month, following the same patterns of pruning previously observed during normal brain development.

The team also examined the connectome of the newly added neurons by determining which brain regions projected neurons to the transplants and quantitatively measuring connectivity strength (the ratio of new neurons to neurons that connected to the transplants from a given brain area). When the researchers compared the connectivity strengths of the equivalent, non-transplanted neurons in controls to those of transplanted neurons, they found that they were similar, suggesting that the transplants formed not only the right shape, but also the correct functional links with other parts of the brain—without plugging into the wrong set of neurons. The few instances where the neurons made incorrect connections might have been avoided by using a more-specific set of visual neurons for transplantation, Gaillard suggested.

Overall, “the detailed analysis of connectivity of implanted cells is a step forward” in a long chain of studies looking at neural transplantation after brain injury, said neurobiologist Anders Björklund of the University of Lund in Sweden, who was not involved in the study.

Encouraged by their connectivity findings, Götz and collaborator Mark Hübener at the Max Planck Institute of Neurobiology studied the functions of the newly integrated neurons. They found that the transplanted neurons reacted to visual stimuli the animals were exposed to, such as striped patterns, and by nine weeks after transplantation, the cells consistently responded more strongly to particular stripe orientations than others, just as developed neurons usually do. This suggests that the neurons’ functions were “tuned” over time, the researchers reported.

Now that the scientists have shown that transplanted embryonic neurons can integrate into adult brain circuits, they plan to return to the question of whether other types of brain cells, such as their direct reprogrammed neurons, can accomplish the same feat. Gaillard said he would like to see the findings confirmed in human stem cell-derived neurons or in animals with larger brains, where the neurons have further to travel to make connections.

Björklund noted that how transplanted neurons integrate into adult circuits remains to be understood.

The ultimate goal is to transplant neurons in people. Toward that end, Götz’s group is currently investigating whether transplanted neurons can repair more serious injuries, such as stroke or traumatic brain injury.

“Once neurons die, there is, at the moment, no real therapy to make these neurons come back,” Götz told The Scientist. “Surely, at some point in the future, these approaches will be used in the clinic.”