If you could take a tour through the corridors of artist Ginny Ruffner's brain, you would surely meet painters such as Pablo Picasso and Salvador Dalí. But you'd also meet scientists such as Galileo Galilei, Jacques-Yves Cousteau, and Marie Curie. Somewhere, in the dark, unmappable regions of her brain, Ruffner translates these manifold influences -- which emerge from her scientific curiosity and her fascination with beauty -- into creations all her own.Originally a painter, Ruffner began working with glass in 1977 and has continued to the present day, incorporating metal and other media. Her sculptures are part science and part fantasy. With titles like "Chrysanthemum Carp" and "Sunflower Evolution," they take scientific concepts such as evolution or entities such as DNA and recreate them in a world of Ruffner's imagining. In "The Sensual Bouquet of DNA," for example, one can find a spiral reminiscent of the standard double helix, but these genetic strands give way to floral blooms and zig-zagging stems.Her interest in science comes from her life-long curiosity about how things work. Her artwork emerges from what she reads about origins and evolutions of life on Earth, as well as her own theories that explain the mysteries of science. "My imagination pales in comparison to the discoveries in science of just how wonderfully intricate the interconnectivity of everything really is," Ruffner wrote in an Email. But she knows that there is more possibility in the universe than science can ever discover or she can ever imagine, she wrote.Ruffner has shown her work in shows and galleries nationwide, including museum collections at the Smithsonian Institution in Washington, D.C., and in her present hometown at the Seattle Art Museum. Her current show, "Aesthetic Engineering," explores recent developments in genetic engineering -- particularly inter-kingdom gene sharing between animals and plants. It is on display at the Kimball Art Center in Park City, Utah, through January 6, 2008.View a slideshow of Ginny Ruffner's work here. Images courtesy of Ginny Ruffner.Jonathan Scheff mail@the-scientist.comLinks within this article:Ginny Ruffner http://www.ginnyruffner.com/B. Griggs, "Joy and science burst from Ruffner's sculptures," The Salt Lake Tribune, Nov. 3, 2007. http://www.sltrib.com/ci_7362213K.R. Chi, "Hot paper in genomics: Selecting for humans," The Scientist, July 1, 2007. http://www.the-scientist.com/article/display/53321/M.L. Phillips, "A programming language for DNA," The Scientist, Nov. 15, 2007. http://www.the-scientist.com/news/display/53863/Kimball Art Center http://www.kimball-art.org/Ginny Ruffner, slideshow of sculptures. Images provided by Ginny Ruffner. http://images.the-scientist.com/supplementary/flash/112707/112707.html
Related Articles 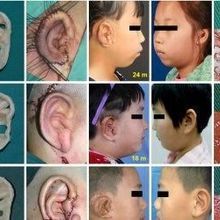