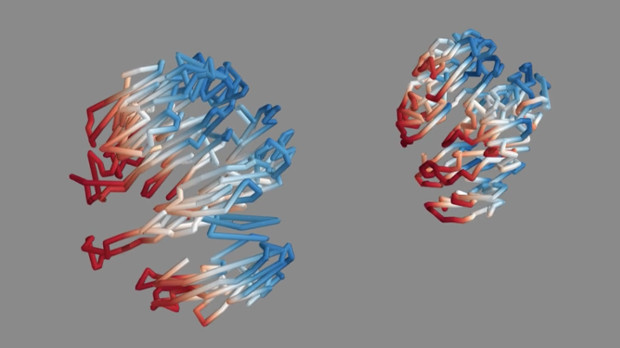 Still from video showing model of chromosome compaction (right) in aging cellsCRISCIONE ET AL, SCI. ADV. 2016; 2 : e1500882In cells undergoing senescence, chromosomes tend to become more compact, according to a report published today (February 5) in Science Advances. This and other chromatin rearrangements noted in the report add to a growing understanding of how the physical structure of chromosomes might contribute to altered gene expression in aging cells.

“This is the first study using this model of replicative senescence to define those higher-order three-dimensional chromatin changes,” said epigeneticist Peter Adams of the Cancer Research UK Beatson Institute in Glasgow who was not involved in the work. “It’s something that people have waited for quite a long time to see.”

Although getting older causes our tissues to deteriorate and eventually fail, at a cellular level senescence is an important process for health. Cellular senescence marks the permanent,...

At the genomic level, “it’s been known for a long time that the chromatin of senescent cells changes radically,” said cell and developmental biologist Jeanne Lawrence of the University of Massachusetts Medical School who also was not involved in the work. Although exactly why “is kind of a mystery,” she said.

Lawrence and colleagues had previously shown, for example, that the normally densely packed heterochromatin at centromeres loosens up as cells age. Others had noted that senescence in some cell types triggers the formation of densely packed heterochromatin foci. Meanwhile, Nicola Neretti of Brown University—who led the present work—and his colleagues had shown that although the chromatin around some genes becomes inaccessible during senescence, other regions seem to open up.

It was time to scale-up, said Neretti. “Instead of just looking at accessibility of different parts of the genome,” he said, “we were wondering how does this happen at the level of the chromosome.”

To examine 3-D genome conformation, Neretti’s team first used a technique called Hi-C, which reveals the proximity of any genomic region to any other in nuclear space. This analysis revealed that as human fibroblast cells became senescent the number of short-range interactions—such as those between neighboring regions on a chromosome—increased, while there was a decrease in long-range interactions—such as those between non-neighboring loci on the same chromosome or between loci on different chromosomes.

This increase in short-range interactions suggested that the chromosomes might be shrinking in volume, said Neretti. To see whether this was the case, the team performed 3-D chromosome painting—a technique whereby fluorescent DNA probes spanning an entire chromosome are used to hybridize, or “paint,” that chromosome in structurally preserved cells. Painting thus reveals the volume of the nucleus occupied by a particular chromosome. Comparing chromosome volumes in proliferating cells with those in senescent cells confirmed the smaller size of those in the latter.

Although there was a global increase in chromatin compaction—that is, a decrease in chromosome volume—associated with senescence, certain regions of the genome behaved in the opposite manner, the researchers found. Hybridization of fluorescent probes to centromeric DNA, for example, revealed that these regions increased in volume, in line with Lawrence’s previous observations. And some heterochromatic regions of the genome became more decondensed too. Furthermore, the expression of genes in these decondensed regions tended to be upregulated, while gene expression in regions that condensed during senescence tended to decrease.

For researchers studying cancer and aging, said Adams, a major goal is to find ways “to maintain the cancer suppressive effects [of senescence] but somehow prevent the ageing [effects]” and thereby help people to maintain healthy tissues for longer.

To that end, the new work “helps us to understand how the epigenome is regulated in senescent cells: how some genes are repressed and how other genes are switched on,” Adams told The Scientist.

Ultimately, added Neretti, “the more we understand about how the senescent state is achieved, the more we will be able to modulate and control it.”