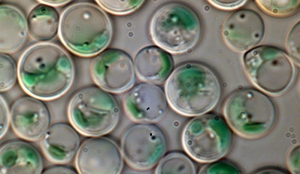 Gladieria sulphurariaGerald SchoenknechtGenes picked up from prokaryotes likely helped an algal species adapt to its extreme environment—acidic hot springs worldwide—according to new research published today (March 7) in Science. Specifically, researchers estimate that about 5 percent of the extremophilic red agla’s protein-coding genes were picked up from bacteria or archaea, granting the metabolic flexibility to survive the extraordinarily conditions.

“It was mostly assumed that eukaryote cells can’t withstand such harshness, but the data show they can—they get the solutions from the prokaryotic world,” said Eduardo Rocha, a microbial evolutionary genomicist at the Institut Pasteur in Paris who was not involved in the research. Although there have been many documented cases of eukaryotic organisms picking up new genes from prokaryotes, it is the first to link laterally transferred genes with adaptive benefits, Rocha added. In this red alga, Galdieria sulphuraria, “for many of the [prokaryote-derived] genes,...

Eukaryote evolution mostly relies on tweaking what’s on hand—duplicating and repurposing genes already encoded in the organisms’ genomes. It’s well-known that prokaryotes like bacteria can pick up genetic material from their environment, and the past few years have uncovered a number of eukaryotic examples of horizontal gene transfer, as well. A 2008 study of a diatom genome, for example, identified hundreds of prokaryote-derived genes. Still, it wasn’t known whether these genes conferred any advantages, noted evolutionary biologist Gerald Schönknecht at Oklahoma State University. 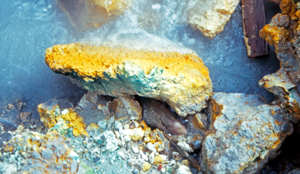 A sulfur- and G. sulphuraria-encrusted rock in an Icelandic hotspring.Christine OesterheltIn order to examine whether eukaryotes can pick up beneficial genes from prokaryotes through horizontal gene transfer, Schönknecht and Andreas Weber at Heinrich-Heine-Universität Düsseldorf in Germany sequenced the genome of Galdieria sulphuraria, which lives in acidic, sulfuric hot springs rich in toxic metals. Despite these conditions, which would shrivel most other organisms, G. sulphuraria can still perform photosynthesis to survive.

In its genome, the researchers revealed at least 75 different bacteria- or archaea-derived gene transfers. This includes a group of archaeal soluble ATPases not previously found in any other eukaryotes, which the researchers speculate allow organisms to withstand extreme temperatures. The researchers also identified bacterial sodium pumps that correlate with resistance to high salinity and a bacterial arsenic membrane pump that helps keep the algae free of the toxic metal. Schönknecht and Weber estimate that, in total, about 5 percent of protein-coding genes in G. sulphuraria were obtained horizontally from prokaryotic organisms in its environment.

“It’s part of a new wave of research providing evidence that [eukaryotes] can have the ability to behave like bacteria in terms of fundamentally changing their lifestyle by gathering genes,” noted Debashish Bhattacharya, an evolutionary geneticist at Rutgers University who did not participate in the study. Furthermore, the data suggest that many single-celled eukaryotes might be naturally “transformable”—much more capable of picking up whole genes than previously thought, he added.

Weber expects that horizontal gene transfer among eukaryotes is probably more common than expected, but the mechanism remains murky. “That’s the next big frontier, figuring out how it works,” he predicted.

Two “likely candidates” responsible for such transfer are transposable elements and viruses, said Chris Bowler, a genome biologist at France’s National Centre for Scientific Research, in an email to The Scientist. Bowler, who led the research identifying bacterial genes in the diatom genome, but was not involved in the current study, added that by tabulating such sequences, their prevalence, and their position near prokaryote-derived genes in the G. sulphuraria genome, researchers could better understand what mechanisms are involved.

The findings also shed new light on commonly cited concerns regarding genetically modified organisms (GMO), said Bhattacharya. If eukaryotes naturally swap genes, the idea that GMOs are inherently “unnatural” may be “a little unfounded,” he said. Instead, if eukaryotes are capable of picking up beneficial genes, concerns should focus more on “the specific gene than the process.”

Correction (March 7): This article erroneously listed Gerald Schönknecht's academic affiliation as the Univeristy of Oklahoma, instead of Oklahoma State University. This mistake has been corrected. The Scientist regrets the error.