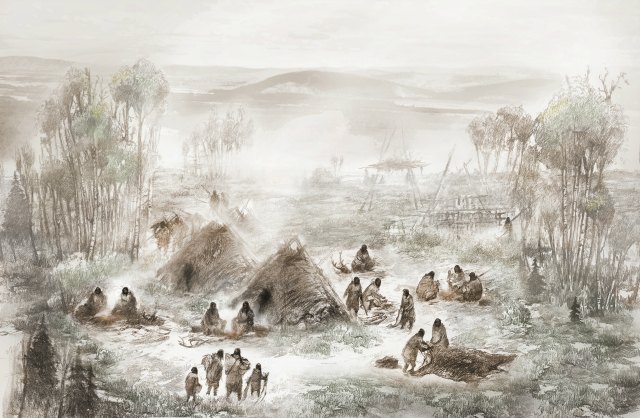 A scientific illustration of the Upward Sun River camp in what is now Interior Alaska ILLUSTRATION BY ERIC S. CARLSON IN COLLABORATION WITH BEN A. POTTERAt the end of the last ice age, about 11,500 years ago, ancient people buried two infants at a residential campsite called Upward Sun River (USR) in what is currently central Alaska. Now, the whole genome sequence of one of the infants—a six-week-old named Xach’itee’aanenh T’eede Gaay, or Sunrise Child-girl by local Native Americans and USR1 by researchers—has revealed that she was part of a distinct and previously unknown group descended from the same founding population as all other Native Americans. The findings were published today (January 3) in Nature.

“USR1 really provides the most definitive evidence for all Native American populations in North and South America deriving from a single population,” says University of Florida geneticist Connie Mulligan, who did...

Researchers usually agree that humans arrived in the Americas through Beringia—the area encompassing parts of present-day East Asia and North America, connected by what was the Bering Land Bridge. But the scientists must rely on inferences from both archaeological and genomic data to figure out how and when this migration occurred.

“These are only the second-oldest human remains in the New World where we have this full nuclear genomic analysis, so this is really kind of new territory,” explains coauthor Ben Potter, an archaeologist at the University of Alaska Fairbanks. “With archaeology, we have bits of detritus left behind. We get clues that we [use] to build inferential arguments in a forensic sort of way. Just the fact that we have these human remains opens up amazing windows” into these people’s lives, he adds.

Geneticist and coauthor Eske Willerslev of the Natural History Museum of Denmark and colleagues sequenced the USR1 genome, but were unable to sequence the full genome of the second infant, Ye?kaanenh T’eede Gaay (Dawn Twilight Child-girl) or USR2, who was younger than USR1 and likely stillborn or born preterm.

Genomic comparisons suggest that USR1 and USR2 were related—probably first cousins—and that the USR1 genome is most closely related to contemporary Native American genomes. The researchers inferred that USR1 is part of a unique population they call Ancient Beringians, who descended from the same ancestors, but stopped interacting and sharing DNA with the populations of other Native Americans between 18,000 and 22,000 years ago. Genetic analysis of the proportions of components of the USR1 genome shared with Native Americans, Siberians, and East Asians also showed that a single founding population of all Native Americans split from East Asian ancestors gradually between about 25,000 and 36,000 years ago. 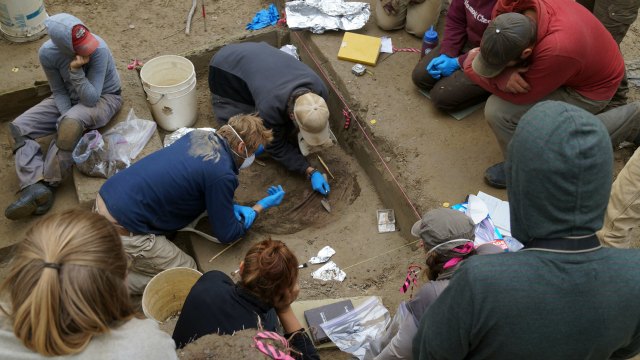 Ongoing work in Potter’s group focuses on investigating multiple aspects of how the Ancient Beringians lived, including changes in their diets over time, how they used plants, and how they organized themselves. “So rarely do we get an opportunity to begin to explore what we thought we knew with better information about populations and perhaps some insights into movement, migration, and overall adaptation,” he says.

This study “will begin to set up some great models for understanding founding populations of First Nations peoples here in North America,” says Cynthia Zutter, an anthropologist at MacEwan University in Alberta, Canada, who was not involved in the work. One inherent limitation is the dearth of samples, she explains, but while these findings are based on just two individuals, they nonetheless carry implications for the movement and longevity of several groups of Native peoples in Beringia.

“We need more samples,” agrees Texas A&M archaeologist Kelly Graf, who did not participate in the work. “We are all trying to make [interpretations] about populations based on one individual from that population,” she says, but “one person in a population doesn’t represent the entire genetic makeup of that group by any means. It’s problematic, but there’s a lot territory out there that needs to be explored. It’s going to take some real effort to do it, but we’ll keep trying.”