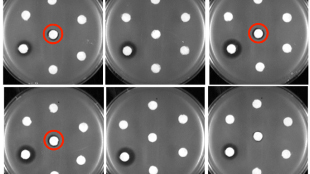 For decades, scientists have looked for ways to make alternate versions of antibiotics naturally produced by bacteria and fungi in hopes of expanding the activities of available drugs. In a study published today (May 29) in Science Advances, researchers from the State University of New York (SUNY) at Buffalo report a technique that allowed them to make 42 new versions of the antibiotic erythromycin, three of which showed activity against drug-resistant bacteria.

“I was going into it thinking maybe we’d make a fifth of the number [of compounds] we actually made,” said Blaine Pfeifer, a chemical and biological engineer at Buffalo, who led the study.

The bacteria Saccharopolyspora erythraea naturally produces erythromycin, but like many antibiotic-producing organisms, S. erythraea doesn’t make the best laboratory strain. Unique growth requirements and a lack of genetic tools make it difficult to engineer these organisms...

To get to point where they could alter the biosynthesis of erythromycin, Pfeifer and his colleagues worked to “transplant” its entire biochemical pathway into the lab-friendly species E. coli. Getting E. coli to express and use the enzymes correctly “took years of tinkering and optimization,” said Pfeifer.

In 2010, Pfeifer’s lab accomplished this feat, laying the groundwork for the current study. “Once we went through all of the growing pains of establishing the process, we had this unprecedented toolbox,” he said.

For the present study, Guojian Zhang—a postdoc in Pfeifer’s lab—used this toolbox to build upon the system by introducing enzymatic pathways that could alter a sugar group added toward the end of erythromycin synthesis. To reconstitute these pathways in E. coli, Zhang borrowed genes from several other bacterial species. “He was kind of doing a Frankenstein thing, pulling all of these enzymes together,” said Pfeifer.

Zhang designed 16 different pathways and introduced each one into a different E. coli strains. He then fed the bacteria an erythromycin precursor—which was also produced in E. coli—and analyzed the resulting products using mass spectrometry. All of the pathways produced unique sugar groups that were successfully attached to the erythromycin precursor, forming 42 analog compounds. He tested them against an erythromycin-resistant strain of Bacillus subtilis and found that three of these compounds inhibited the bacterium’s growth.

Pfeifer said he was surprised at how well the technique worked. “This system had a level of flexibility that we didn’t anticipate,” he told The Scientist. The flexibility of the enzymes to accept alternate sugar substrates was a critical feature of the study, said Kira Weissman, a biological engineer at the University of Lorraine in France who was not involved in the work.

Going forward, Pfeiffer said his team plans to target other sugar groups on the erythromycin molecule. “There are a lot of opportunities for variation with this system because it is so complex,” he said.

Zhang said the experimental design could enable other researchers to make similar variations of other natural products, or “unnatural natural products,” as they’re commonly called. The erythromycin pathway is the best-characterized natural product pathway, making it a sort of model system for biosynthetic engineering. “They started out with a system that was nicely producing,” said Weissman.

Much work remains to generalize this technique to other compounds. Pfeiffer’s team is approaching this challenge by first working to transplant pathways for other antibiotics and for cancer drugs into E. coli. “Theoretically, this idea could be applied to all sorts of natural products,” he said.