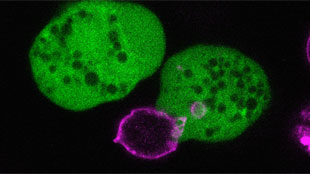 Entamoeba histolytica (green) ingesting bites of human T cells (purple).KATHERINE RALSTONFor decades, scientists assumed that the intestinal parasite Entamoeba histolytica killed human tissues with toxic molecules before ingesting them. They were wrong; it’s actually the other way around, according to a study published in Nature today (April 9).

Katherine Ralston, a postdoctoral researcher at the University of Virginia, has shown that E. histolytica—a single-celled amoeba—tears chunks from host cells and eats them. These attacks eventually kill the cell, at which point the parasite moves on. E. histolytica is the only parasite known to attack tissues in this way—a process known as trogocytosis, after “trogo,” the Greek word for “nibble.”

“It was a complete surprise,” said Virginia’s William Petri, Jr., who led the study. “I have focused my professional career on studying this parasite and I hadn’t appreciated it, nor had anyone else in the field. Katie...

Ralston made her discovery after watching the amoebae under a microscope, while they were attacking human cells that had been labeled with a fluorescent marker. Within a minute of contact with the host cells, she noticed that the E. histolytica had swallowed several fluorescent fragments.

A similar process happens in the human immune system, when T cells pinch off segments from dendritic cells. Except in that case, the target cell does not die. At first, the same is true for E.histolytica’s targets. They can withstand several bites, but after a point, their membranes rupture and they die.

Once the amoebae had killed a few cells in this way, they started ingesting others more quickly. Trogocytosis seems to breed more trogocytosis. “It becomes like a snowball rolling downhill,” said Petri. “We don’t understand that at all.”

E. histolytica infects around 50 million people around the world, and can cause a potentially fatal diarrhoeal disease called amoebiasis, which kills around 100,000 people a year. Petri and Ralston found evidence to suggest that trogocytosis contributes to these debilitating symptoms. When they looked at the amoebae in the guts of mice, they saw that the parasites use their cell-killing technique to invade the intestine. If the researchers blocked trogocytosis with drugs, they forestalled these invasions.

E. histolytica can also tell the difference between living and dead cells. Once their target is dead, they detach and move away. If Ralston offered the amoebae post-mortem cells, they simply swallowed their prey whole—phagocytosis—rather than nibbling at it.

This suggested that the amoebae are not killing the cells for their nutritional value. Petri speculated that the parasite might be able to sneak past immune cells like macrophages by flooding the gut with cellular corpses. “Maybe by leaving the dead cells for the macrophages to eat, it leaves a decoy for the immune system,” he said. This might also help explain why many people who are infected with E. histolytica only develop noticeable problems after several asymptomatic months.

“This is fascinating work with great imaging,” said clinical microbiologist Sharon Reed from the University of California, San Diego, in an e-mail.  “It totally changes how we think about Entamoeba killing cells.”

“Amoebiasis is still a major cause of morbidity and mortality, particularly in developing countries,” Reed continued. “Treatment relies predominantly on one class of drugs so [we need to] identify new pathways and potential drug targets in the future.”

Ralston had already shown that the amoeba depends on a protein called lectin to attach itself to a host cell, and on other proteins like actin and EhC2PK to kill it. “These are wonderful targets for therapies so we already have a couple of potential leads,” said Petri.

“The importance and pleasure of this [study] is that it allows us to understand how this remarkable pathogen kills host cells and causes disease in a way that was not previously imagined,” John Samuelson from Boston University School of Medicine, who was not involved in the work, told The Scientist in an e-mail.