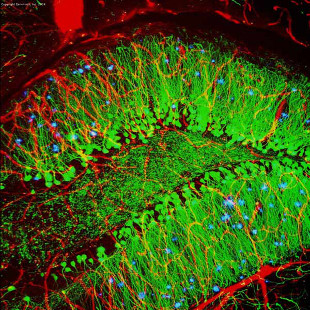 Mouse brain with amyloid-β plaques (blue)GENENTECH, ALVIN GOGINENI (VIA NIGMS)Removing built-up plaques of amyloid-β in the brain is a long-sought therapy for patients with Alzheimer’s disease, but for a variety of reasons, few treatments have succeeded in alleviating symptoms once they reach clinical trials. In a study published today (November 9) in Nature Neuroscience, an international team examined the effects of two amyloid-β antibodies on neuronal activity in a mouse model, finding that the antibodies in fact led to an increase in neuronal dysfunction.

Marc Busche, a psychiatrist at Technical University of Munich in Germany, and others had previously found that neuronal hyperactivity is common in mouse models of Alzheimer’s disease. The chronically rapid-firing neurons can interfere with normal brain function in mice. “There’s evidence from human fMRI [functional magnetic resonance imaging] studies that humans will show hyperactivation early in the disease, followed by hypoactivation later...

To investigate whether certain antibodies would alleviate this Alzheimer’s disease-associated phenotype, Busche and his colleagues first turned to bapineuzumab—a human monoclonal antibody that initially showed promise in treating mice modeling Alzheimer’s disease, but failed in human clinical trials. The dominant hypothesis for bapineuzumab’s failure is that it was administered too late in the disease progression, said Busche. “But it’s still a hypothesis,” he added. “There’s no real explanation for why these antibodies failed.”

The team’s latest experimenters used mice with a genetic mutation that caused them to overexpress the human amyloid-β protein; these engineered mice also displayed neuronal hyperactivity. The researchers injected 3D6, the mouse version of bapineuzumab, into the engineered mice, as well as into wild-type mice that had normal expression levels of the mouse amyloid-β protein. The team observed the effects using two-photon calcium imaging in a blinded study.

As expected, 3D6 decreased the amount of amyloid-β plaques in the engineered mice, while the control mice displayed no reaction to the injected antibodies. However, the mice engineered to overexpress human amyloid-β showed increased neuronal hyperactivity in response to the antibody, regardless of what stage of plaque development they were in. Even mice too young to have developed plaques showed aggravated hyperactive neurons. The team observed the same phenomenon when it tested a second antibody, β1, which went through early stages of drug development but was never used in human clinical trials.

The results surprised Busche. “When it turned out that the antibody group was worse than the control group, it was unbelievable. But we checked many times and there was no mistake,” he said. “We don’t see this effect in wild-type mice so it must be dependent on the interaction between the antibody and amyloid-β.”

Busche was quick to point out that the mouse model is not the same as a human Alzheimer’s patient. However, he said, “it gives a sense that we don’t understand the antibody’s action, and this might go on in the human brain as well.”

“I fully believe in their results, but I have some hesitation in saying that this result explains the failed clinical trials for amyloid-β immunotherapy,” said Cynthia Lemere, a neurologist and Alzheimer’s disease researcher at the Brigham and Women’s Hospital in Boston. “I think the major reason for clinical trials failing for immunotherapy is that up until now, they’ve been done in people with moderate-to-severe Alzheimer’s disease, and then mild-to-moderate. Now the studies are going further to include people with very early stages of clinical symptoms—and to my knowledge, they haven’t been stopped because patients are getting worse.”

Thomas Wisniewski, a cognitive neurologist at New York University, voiced a similar perspective. “I don’t think this is an explanation for why immunotherapy isn’t working—I think there are other more plausible reasons for that,” he said, citing clinical trials that treated patients during later stages of Alzheimer’s disease progression, as well as those that haven’t addressed tau-related pathologies, or didn’t target the key types of amyloid-β. “[The neuronal hyperactivity] is an interesting phenomenon to be studied,” he added, “but I think it’s a separate issue.”