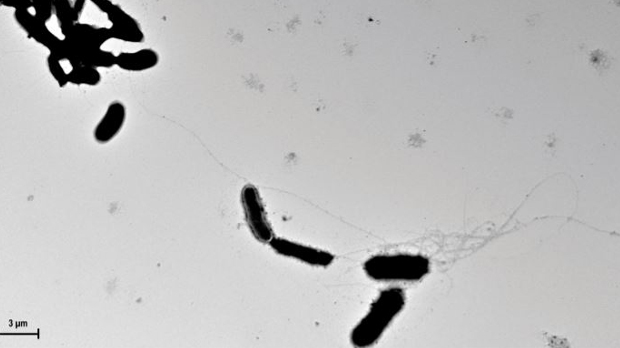 Amyloid-β fibrils propagate from yeast surfaces and capture C. albicans in culture medium.D.K.V. KUMAR ET AL., SCIENCE TRANSLATIONAL MEDICINE Plaques of amyloid-β peptides in certain parts of the brain are a telltale sign of Alzheimer’s disease–associated neurodegeneration. When not in pathological aggregates, these peptides—found in healthy brains at low levels—are commonly considered inefficiently cleared catabolic byproducts. Now, researchers at Harvard and Massachusetts General Hospital (MGH) and their colleagues have shown that amyloid-β can protect against yeast and bacterial infections in two animal models, as well as in cultured human cells. Amyloid-β was able to bind carbohydrates on the surfaces of microbes, preventing the invaders from binding host cells. The team’s findings, published today (May 25) in Science Translational Medicine, suggest that amyloid-β may function similarly to antimicrobial peptides of the innate immune system.

“This is quite good and convincing work that confirms host defense activity of amyloid-β against fungal...

“Amyloid-β is overdue for an update,” said Douglas Ethell, a neuroscientist at Western University of Health Sciences in California who was not involved in the work. “For too long it’s been viewed as a useless byproduct that wreaks havoc on the human brain. This paper adds to a growing body of evidence that amyloid-β serves important physiological roles that we are only now beginning to understand.”

Rudolph Tanzi and Robert Moir, who study neurodegeneration at Harvard MGH, sought to test whether amyloid-β might protect mice, Caenorhabditis elegans nematodes, and human cells in culture from invasion by various microbes.

Young mice that expressed high levels of human amyloid-β (but did not have pathological plaques) infected in the brain with Salmonella typhimurium were more likely to survive the infection compared to wild-type mice that did not express the peptide, Tanzi, Moir, and their colleagues found.

“Overnight, the injected bacteria caused plaque deposits with a single bacterium in the middle,” said Tanzi. “We think about the slow production of amyloid plaques over decades and in this mouse model, a bacterial infection could cause full-blown plaques overnight.”

C. elegans expressing a modified form of human amyloid-β survived three or four more days following infection in the gut with Candida albicans, compared to wild-type worms that did not express the peptide.

In vitro, transforming human brain neuroglioma or Chinese hamster ovary cells with an amyloid-β isoform resulted in better survival following a yeast infection. Fewer fungal cells were able to adhere to the transformed cells compared to control cells that did not express the peptide, the researchers found.

“Based on our work, it’s possible that amyloid works in a similar way, quickly seeded in the brain in response to a microbial pathogen,” Tanzi told The Scientist.

Using microscopy, Tanzi, Moir, and their colleagues observed that amyloid-β formed fibrils and trapped C. albicans cells in the guts of infected worms. In mice, S. typhimurium cells were found entangled within amyloid-β deposits; in noninfected mice, the peptides did not form fibrils.

The team will next look for pathogens in the brains of people with Alzheimer’s disease.

“Since the properties that make the peptide problematic are the very properties that make it effective in host defense,” said Hartshorn, “the next question is whether we can find a balance to both prevent plaque formation in the brain and not damage the immune activity of amyloid-β.”