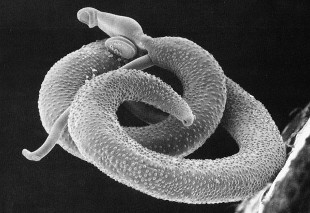 The “hygiene hypothesis” proposes that allergic reactions—in which the immune system misfires on innocuous environmental triggers like pollen or peanuts—are driven by a lack of exposure to parasites or other pathogens. In the absence of these true illness-causing agents, the immune system accidentally attacks similar-looking, harmless compounds in the environment with molecules called immunoglobulin E (IgE) antibodies. Data published today (October 29) in PLOS Computational Biology by a team of researchers in the U.K. help to substantiate that hypothesis.

“It will change how we think about allergens,” said Padraic Fallon, an immunologist at Trinity College, Dublin. “It puts the science behind what we thought might be happening. They’ve elegantly dissected this fundamental question: ‘What is an allergen?’”

The team, led by Nicholas Furnham of the London School of Hygiene & Tropical Medicine, hypothesized that “there must be some molecular similarity between what the...

There are 331 protein families that contain known allergens; 10 of those families encompass nearly 40 percent of all allergens. Furnham’s team collected all available data on allergens within those families, eventually totaling 2,712 examined proteins. The researchers determined the DNA sequences that code for the part of an allergen that is recognized and attacked by the immune system, called the epitope; most proteins had more than one. The team then used that information to construct the proteins’ 3-D structures.

Once they computed these data for the allergenic proteins, the researchers searched for similar DNA sequences or protein structures in the parasitic worms, using either published DNA sequences or proteins from databases. The team examined 70,403 parasite protein gene sequences, and found 2,445 proteins that were statistically similar in sequence or structure to those from the known allergens. Analyzing the epitope regions, the researchers homed in on 206 parasite proteins with identifiable epitopes, predicting that this set would cause an immune response in humans similar to an environmentally triggered allergic response.

“Many, many people have looked at the underlying sequences of these parasite proteins and compared them to known sequences of allergens and identified, on a linear basis, how similar or dissimilar they are,” said Thomas Nutman, deputy chief of the Laboratory of Parasitic Diseases at the National Institute of Allergy and Infectious Diseases. “But the newer computational tools and 3-D modeling here help predict the portions of the molecule that are driving the IgE response.”

To validate its predictions, the team tested the in vitro immune responses of human cells to a protein from the parasitic worm Schistosoma mansoni, SmBv1L, which is similar to a protein found in birch pollen from protein family BetV1. “The family is one of the most prevalent pollen allergens,” said Furnham.

Using blood samples from 222 individuals in a Ugandan fishing village who were already infected with S. mansoni, the researchers measured the antibody response to the parasite’s protein. Not only did the blood serum react against the modeled parasitic infection, but the worm protein was targeted by the same antibodies that cause allergic reactions. “It was quite a novel finding,” said Furnham. “It was a way of showing that our predictions were working.”

The team hopes its work will inform the development of future therapies for allergic conditions, he added.