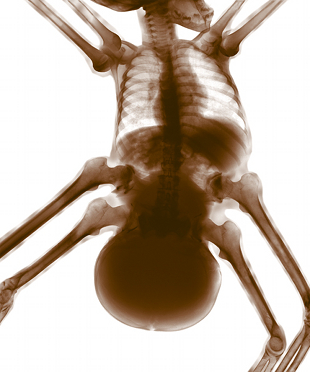 The arachnid hominid makes an appearance in Andrews' video.Brian AndrewsAnyone with arachnophobia is all too aware of how a spider moves. And we’re all accustomed to the rhythm of human ambulation. So it’s a little disconcerting to see a human pouncing like a spider. The creature—a woman’s body carried by long spidery legs—is part of artist Brian Andrews’ animation “Hominid,” a tale of predator and prey inspired by x-ray films of human and animal skeletons.

Mythology is rife with examples of chimerical creatures, from Greek centaurs to the jackal-headed Egyptian god Anubis. Even now, we remain fascinated with beings, such as the mythological Sasquatch or historical Neanderthal, that blur the lines of what we understand to be human. Science is expanding our idea of “self” by characterizing the myriad microbes that populate our bodies and by expressing human proteins in transgenic animals.

X-rays seemed a natural media for his project, so Andrews began to canvass hospitals and veterinary offices for extraneous x-ray films. In 2004, when Andrews was seeking his inspiration, he found that many hospitals kept extra films—the product of photographing the wrong limb, or other errors—in 40 gallon drums. Allowed to look through these anatomical treasure troves, Andrews was most often drawn to x-rays from children, not merely because they captured more of their bodies, but also because “kids squirm—they don’t stay in poses,” which gives their films much more character and life.

Once he’d amassed enough animal and human films, Andrews let inspiration guide him as he chose which animals to combine with humans. He used Photoshop to “really get into the anatomy," he says. "Some of the bones were human bones that were bent and twisted to take on a more veterinary shape, and vice versa.” Then he digitally painted in the soft tissue and silhouette of his new creations. 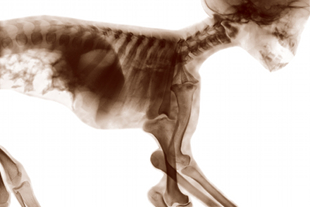 A quadruped hominid.Brian AndrewsIt's difficult to determine where human ends and animal begins in Andrews' images, even when one “hominid” has eight limbs or a startling pair of chicken-like wings. But the artist wanted to move beyond still photographs to capture the visceral sensation of his creations. For the past year, Andrews has worked on animating his vision with students and other faculty members at Ex’pression College of Digital Arts, where he teaches digital filmmaking. The tricky part proved to be getting the animal-human hybrids from his still photos—like the winged hominid or amphibian hominid—to move in a believable manner, as none of his creatures exist in nature.

This required careful examination of how real spiders, birds, and frogs move, says Joseph Daniels, a faculty member at Ex’pression College who supervised the animation of Andrews’ images. The spider woman video tells a story of an arachnid hominid stalking and attacking a winged hominid. To get the spider woman’s movement right, Daniels and his students watched videos of real spiders frame-by-frame.

“We asked, what does creepy mean? We looked at how many frames it took for a spider to lift its leg, how many frames to put it down. Why does this feel creepy rather than soft and happy?” Daniels explains. But though Andrews combined only two creatures—spider and human—into a predator, Daniels and the class looked to other animals for inspiration as well. They modeled arachnid hominid’s stalking motions on lionesses tracking prey. But just as it’s difficult to delineate where the humanness begins and ends in Andrews’ creations, Daniels wanted his students to create motion that seamlessly combines human and animalistic elements. 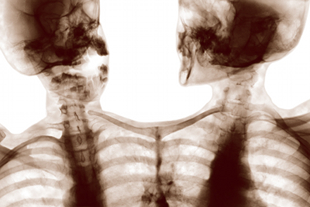 A two-headed hominid.Brian AndrewsAs the avian hominid took flight, “We didn’t want it to just look like bird wings on a human torso,” Daniels says. So he showed his students videos of birds flying, “flapping at different rates and angles.” The result is a cast of characters with movement all their own.

Andrews’ work is as fantastical as it is topical. Bioethicists still struggle with the morality of animal-human hybrids as researchers continues to push the boundaries of what’s possible. Even some people who support human embryo research may feel uncomfortable with the notion of genetically engineering chimeras and hybrid animals, says Robert Streiffer, a bioethicist at the University of Wisconsin, Madison.

Genetic engineering in the name of art is no fantasy, however. Eduardo Karc, a Chicago-based artist, convinced a researcher to create Alba, a transgenic rabbit that expressed an enhanced version of the green fluorescent protein originally derived from jellyfish. Though researchers might have sound arguments for adding a dash of humanness to an animal, it’s difficult to extend the same moral argument to artists, Streiffer says: “Is it OK to mess with the lives of sentient animals for the sake of art?" he asks. "It’s difficult to say art merits the same importance as science.”

Andrews has skirted ethical issues by engaging in an entirely fictional form of genetic manipulation—tweaking our sense of self without entering a moral morass. He says that a longer film starring his hominids is in the works.

Hominid from Brian Andrews on Vimeo.