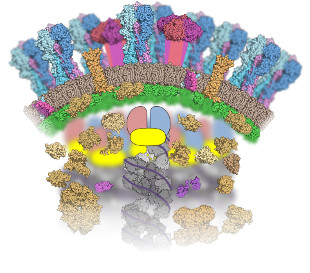 A cross-section of an influenza virion, showing the locations and relative abundance of viral proteins (brightly colored) and host membrane and proteins (brown). EDWARD HUTCHINSON

A spherical influenza virion is an orderly hodgepodge comprised of hundreds of proteins that originate from both the virus and its host. A new mass spectrometry analysis, published today (September 16) in Nature Communications, has yielded the most complete picture to date of the identities, arrangements, and ratios of proteins in influenza virions.

Previously, only the most common and conspicuous influenza virion proteins were well characterized. Compared to the perfect icosahedrons of adenovirus, for example, irregular influenza particles are difficult to crystallize and to study structurally, according to the lead author of this latest work, Edward Hutchinson, a postdoctoral research assistant working with virologist Ervin Fodor at the University of Oxford. “When you look at influenza, you get things that look kind of like...

To sort out the virion components, Hutchinson and his colleagues used sensitive mass spectrometry. Comparing the intensities of ion spectra among protein fragments allowed them to quantify the relative abundance of each protein. They began this analysis with WSN, a flu strain from 1933 that—thanks to decades of growth in tissue culture—produces more uniform virions than clinical isolates. The researchers then compared the compositions of WSN and six other strains, including several recent clinical isolates. The strains shared a core set of viral and host proteins in consistent ratios, while other viral and host components varied.

Among these core proteins was viral NS1—so named because it has long been considered nonstructural. Among other activities, NS1 can inhibit the immune response triggered by the cytokine interferon. Finding NS1 in virions was an unexpected but logical result, said virologist Paul Digard of the University of Edinburgh, who was Hutchinson’s doctoral advisor but was not involved in the work. “NS1 is an important protein in terms of the biology of the virus, because it’s one of the things that counteracts the host defenses, so it’s always been a bit of a mystery” that it had not been detected within virions, Digard said. “It’s like turning up for a battle but not delivering your main weapon until halfway through.”

Intriguingly, even uninfected host cells produced particles that shared characteristics with virions. This result lends support to the “Trojan exosome hypothesis,” which posits that viruses bud out from an infected cell using the host’s native machinery for exporting proteins or RNA in membrane-bound vesicles called exosomes.

“People have tended to think of influenza virion formation as something driven by the virus, something that the virus imposes on the cell,” Hutchinson said. “What we’re seeing here is almost more of a collaborative process: the virus is recruiting things which might be happening anyway in the cell.”

The variety of host proteins identified in virions could provide fodder for future studies, according to virologist Wendy Barclay of Imperial College London, who was not involved in the study but has collaborated with Fodor’s group on other work.

“It’s not surprising that there are host proteins in there, but this is the first real thorough description of which ones are there,” Barclay said. “What do they do? Are they just bystanders being carried along because the virus has taken over this exosome pathway in order to bud, or do they really help the virus along the way?”

The team also found differences in host protein composition between viruses grown in mammalian cells and in chicken eggs, which are typically used to grow viruses for vaccines. It’s unclear whether these differences are relevant for vaccine production, or for the zoonotic transmission of influenza from birds to humans.