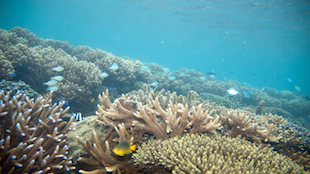 A major pathway for strategically inducing cell death has been shared between humans and coral since their ancestral lineages diverged, according to a paper published today (June 9) in PNAS. The pathway, mediated by cytokines and tumor necrosis factor (TNF) receptors, was once thought to have originated more recently, prior to the divergence of vertebrates and invertebrates, and to have diversified in the vertebrate lineage. But as it turns out, corals have as diverse a collection of TNF proteins as do humans, and TNF-induced apoptosis is involved in coral bleaching.

“The dogma has been if there’s something not in a fly or a worm, something even more ancient such as a coral should be even simpler,” said Steven Quistad, a marine biologist at San Diego State University and lead author of the study. “Corals are actually much more similar to humans than...

“The large number [of TNF ligand and TNF receptor] encoding genes in the [coral] genome is surprising and changes our understanding of the origin and divergence of these gene families,” Greg Wiens, a research immunologist at the National Center for Cool and Cold Water Aquaculture, a division of the US Department of Agriculture’s Agricultural Research Service in West Virginia, wrote in an e-mail to The Scientist. “These findings highlight the importance of genome projects of basal phyla toward understanding the evolution of immunity.”

Apoptosis helps shape humans and corals during development, explained Mathieu Pernice, a coral scientist at the University of Technology, Sydney, who was not involved in the study. Humans and corals alike also use apoptosis to respond to viral and bacterial threats by strategically killing off affected cells. Pernice and others had previously shown that heat stress leads to apoptosis and bleaching in coral, but no one until now investigated which upstream ligands and receptors induced the cell death.

Meanwhile, researchers investigating TNF-induced apoptosis had looked for TNF receptors and ligands in fruit flies and had found few only one member of each, even though humans have 18 TNF receptors and 29 ligands. This led to the conclusion that TNF-induced apoptosis had could be traced back to a single gene in arthropods and had diversified in the vertebrate lineage.

Sequence data from the coral Acropora digitifera, whose genome was published in 2011, led Quistad and his colleagues to hypothesize that TNF receptors and ligands were much older, however. There appear to be 40 TNF receptors and 13 ligands in A. digitifera.

To test just how functionally conserved TNF family proteins are, the researchers exposed the coral Acropora yongeii to the human apoptosis-inducing ligand TNF-α. TNF-α induced a significant increase in apoptosis among the coral cells.

What’s more, exposing A. yongeii to human TNF-α led to signs of coral bleaching. Bleaching happens when corals are exposed to stressors such as high temperatures. During bleaching, corals expel the photosynthetic algae they need to survive. Coral treated with human TNF-α expelled 200 percent more algae than did untreated coral after seven hours.

A coral TNF ligand likewise led to higher rates of apoptosis among human immune cells expressing a TNF receptor compared to in cells in which the cell death receptor was knocked out.

The findings indicate that TNF ligands and receptors were abundant in coral as far back as 550 million years ago, and that the arthropod lineage subsequently lost many TNF-related genes.

Quistad speculated that the evolution of TNF-induced apoptosis may have played a role in the rapid diversification of animal body plans during the Cambrian explosion, around half a billion years ago. He noted that the coral TNF genes date to that period, whereas animals that diverged from the human lineage earlier, such as sponges, do not appear to have TNF-induced apoptosis genes.

The researchers suggested that scientists must now systematically test the effects of the many combinations of cell death ligands and receptors in the TNF family present in coral. This will help them to figure out which molecules are involved in coral bleaching and which are involved in other apoptosis-related activities.

Pernice agreed that understanding the role of the TNF-induced apoptosis pathway will be important going forward. “It’s probably not the only mechanism leading to bleaching, but it’s one of the major ones,” he said.

Quistad suggested that coral apoptosis ligands could provide a new library of diverse cell death inducers that could inspire cancer drugs. More generally, “we can learn a lot more about our own immune system and where we came from by studying corals,” he said.

“We have the tools and the skills to look in corals almost like we look in humans,” said Pernice. “In this case it brings exciting news about apoptosis, but there will be plenty of other things to look at.”