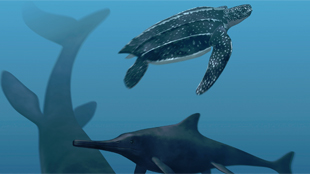 Now, Johan Lindgren from Lund University has taken the study of prehistoric colors for a swim. His team has discovered traces of melanosomes, and the dark pigments they contain, in the skins of three fossilized marine reptiles: an ancient leatherback turtle; a dolphin-shaped ichthyosaur; and a mosasaur, an aquatic, flipper-limbed relative of monitor lizards. The results are published today (January 8) in Nature.

“It’s great to see that evidence for pigmentation has been found in other groups of fossil organisms and in other fossil tissue types,” said Nicholas Edwards from the University of Manchester, who was not involved in the research. It shows that such pigments are “not necessarily limited to a narrow set of preservational conditions,” he wrote in an e-mail.

Like other groups, Lindgren’s team scanned its specimens under an electron microscope. The researchers saw long, sausage-shaped melanosomes, which typically...

But the team went further by also studying the chemical composition of the fossils, using a technique that hit the specimens with a focused beam of ions and analyzed any molecules that bounced off. This confirmed the presence of eumelanin.

“The method is pretty fast and minimally destructive,” said Jakob Vinther from Bristol University, who pioneered the study of prehistoric melanosomes. “If we want to look at a dinosaur, we can’t scrape all the feathers off or some curator would be very unhappy. This is a great method for looking at specimens where we can only take small samples.”

The team found that their ancient leatherback turtle—a 55-million-year old specimen from Denmark—probably had a very dark back and a light belly. This pattern, known as countershading, is seen in many modern animals like great white sharks, penguins, and living leatherbacks, and helps to camouflage the creatures from onlookers both above and below.

A dark, melanin-rich back also allows the modern leatherback to absorb the sun’s heat more quickly, and maintain a high body temperature. This ability probably helps it to grow to a huge size quickly, and to survive in both the warm tropics and near-freezing poles. “It’s the only turtle you find in these High Arctic environments and if you look at its skin, it’s jam-packed with these melanosomes,” says Lindgren. “There’s a good chance that the fossil turtle lived a very similar life.”

The same may apply to the other two reptiles that the team analyzed: a 190-million-year-old ichthyosaur from England and an 86-million-year-old mosasaur from the U.S. It seems that these creatures also had dark, melanin-rich skins, grew quickly, and were found in polar waters.

To Lindgren’s surprise, the ichthyosaur was not countershaded like the turtle, but uniformly dark all over. “You don’t see that in many animals today, except for the sperm whale,” said Lindgren.  Sperm whales dive deeply, and their all-black coloring may help to hide them in the lightless depths. Lindgren suggested that the even color of his ichthyosaur lends support to the popular idea that some of these animals were also deep-divers.

But Edwards cautioned that “this area of research is still in its relative infancy.” It may be premature to make any claims about melanin’s role in these ancient species, given that the pigment is common and has many possible functions. “Also, the methods used here can only provide data over an extremely small surface area,” he added, noting researchers ought totread carefully before extrapolating that data to paint an entire organism.

Dinosaur feathers probably had a wide range of colors, and only some of these—reds, browns, blacks, and whites—were represented by melanosomes. By contrast, Lindgren suspects that the eumelanin patterns in his three specimens more accurately reflect their full range of colors. “If you look at modern marine animals, whether whales or pelagic sharks or turtles, they’re mainly countershaded or one single color,” he said. “There’s a fairly good chance that we’re seeing a large part of their original coloration.”

The presence of melanin may explain why the skins of these reptiles were so well-preserved. Unlike other molecules that break up with energy or heat, melanin absorbs ultraviolet radiation and protects cells from high temperatures and chemical assaults. “The only reason that we have these skins at all is that they’re jam-packed with melanosomes,” said Lindgren. For that reason, he hopes to recover and analyze similar skin samples from even more marine species.