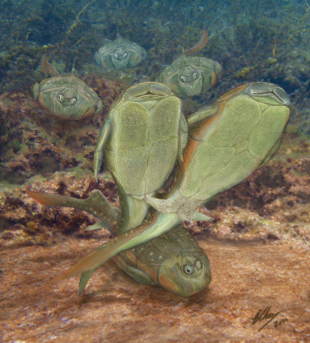 “It would not take a whole lot of evidence to reshape that tree to suggest a different history,” said evolutionary biologist Martin Brazeau of Imperial College London who was not involved in the study, which was published today (October 19) in Nature. “But I think that’s part of what makes this a really exciting discovery. It’s going to drive a lot of debate and I think it’s one of the most important discoveries in this area of...

“Internal fertilization might be even more widespread than implied by these fossils, because it doesn’t always have an obvious morphological (anatomical) signature,” Michael Coates from the University of Chicago who was also not involved with the research said in an e-mail.

Microbrachius is an “antiarch,” a member of heavily armored group of fish that are believed to be the most primitive subgroup among armored fish (placoderms), dating to about 380 million to 400 million years ago. Looking at new specimens from Orkney Islands in Scotland, an international team of researchers concluded that solid bone structures on backsides of males, once thought to be modified pelvic fins, are actually claspers that may have protected soft tissues used for transferring sperm into the female’s cloaca. “Claspers are very distinctive structures with a single function: to effect internal fertilization. These claspers, which have now been found in numerous specimens, are conclusive evidence that fertilization was internal in Microbrachius,” said coauthor Per Ahlberg of Uppsala University in Sweden.

Fossilized females also showed evidence of having accepted a male’s genetic package internally. Ahlberg describes the “paired plates at the posterior end of the body armor, with a peculiar ridged surface that faces inwards. The fact that the ridges face inwards, whereas the internal surfaces of all other bones are smooth, suggests that they have a role in copulation: we surmise that they face into the cloaca, and that the hooks and ridges of the claspers grasp onto them during mating.”

“I was gobsmacked to realize what a huge discovery it was with all its implications to understanding the origin and evolution of sexual reproduction in our deep distant ancestors,” said first author John Long, a paleontologist at Flinders University in Australia.

Researchers have found similar genital plates on females of two other antiarch species, as well as evidence of embryos being found inside the body cavities of females in other placoderms, suggesting internal fertilization may have been more widespread in these ancient fish.  However, claspers have previously only been found in later placoderms. “This absence of obvious [structures on] males is a puzzle, but it is possible, for example, that claspers only developed during the mating season and that our fossil localities didn’t sample their breeding environments,” said Ahlberg.

Indeed, Coates said, it might well be the case that “reproductive strategies change throughout vertebrate evolution, from internal to external, flipping back & forth more than might commonly be considered.”