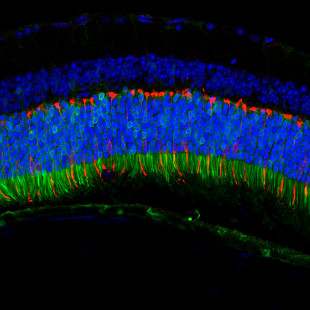 Retinal targeting by Anc80LIVIA CARVALHOThe immune system is designed to protect the body, but it sometimes gets in the way—by rejecting potentially life-saving blood transfusions or organ transplants, for example. Because one of the most commonly used methods for delivering gene therapies involves viruses as vectors, scientists developing such treatments are working to circumnavigate the host immune response.

Adeno-associated viruses (AAVs) have shown promise as gene-therapy delivery vehicles in clinical trials evaluating treatments for hemophilia and a genetic form of blindness. Problem is, anywhere from 30 percent to 90 percent of people have already been exposed to AAVs—which are not pathogenic—and have developed immunity to them, said Luk Vandenberghe of the Schepens Eye Research Institute and Massachusetts Eye and Ear Infirmary in Boston. As a result, they are ineligible for AAV-based therapies. “And it could, for some of these diseases, actually be a life-or-death differentiation—enrolling in a...

In an effort to generate gene therapy vectors that could evade the immune system, Vandenberghe and his colleagues deduced the evolutionary history of today’s AAVs. They then synthesized the predicted ancestral viruses and tested them as gene therapy vectors in mammalian tissues. Their results were published today (July 30) in Cell Reports.

“This is a very thorough, creative, and carefully done study,” Jean Bennett of the University of Pennsylvania, who has collaborated with Vandenberghe but was not involved in the work, told The Scientist in an e-mail. “The ancestral AAVs have promise with respect to use, although, ultimately, human testing would reveal their utility.”

“This is on par with . . . other approaches” to designing immune detection-evading viral vectors, said R. Jude Samulski, director of the University of North Carolina Gene Therapy Center in Chapel Hill, North Carolina, who also was not involved in the work.

Researchers have used a variety of approaches to modify AAVs; most involve rearranging coat proteins called capsids, rendering the viruses unrecognizable to hosts. No matter the method, “everybody’s looking for capsids that change the surface enough so that the pre-existing neutralizing antibodies don’t recognize it,” said Samulski.

Vandenberghe and his colleagues gathered the amino-acid sequences of capsid proteins from 75 viruses circulating today in primates. They then created a putative evolutionary tree for the viral family, which included nine ancestral viruses leading back to the oldest common ancestor, “Anc80.” In several places, the amino-acid sequence of Anc80 was ambiguous, with two amino acids possible at a given position, so the researchers created a library of all 2,048 possible sequences. They selected one, “Anc80L65,” based on its ability to assemble into viral particles, package the therapeutic transgene DNA, and infect mammalian cells in culture.

Anc80L65 successfully expressed a transgene in the mouse retina, skeletal muscle, and liver, and the expression was as good or better than that of AAV8—a commonly used gene therapy vector tested as a control.

“In some animals, not in all, we were able to achieve gene transfer even though these animals have pre-existing immunity against AAV8,” said Vandenberghe. “So this is one way of testing this initial hypothesis that we generated an immunologically distinct virus that can circumvent this pre-existing immunity problem.”

Beyond Anc80L65, the researchers recreated eight additional ancient viruses that represented different branching points on AAV evolutionary tree. The hope is that these viruses will further help researchers understand viral architecture and evolutionary history. “The structure-function relationships themselves will be useful for further improving gene therapy vectors,” said Bennett.

When it comes to designing AAV-vectors for gene therapy, “no one has any idea which one or if any of them are going to work,” said Samulski. “It may be a combination of ancestral mixed with library mixed with rational design [approaches]. . . . At this point in time, anything else you can add to the arsenal to attack the question in hand is valuable to the research community.”