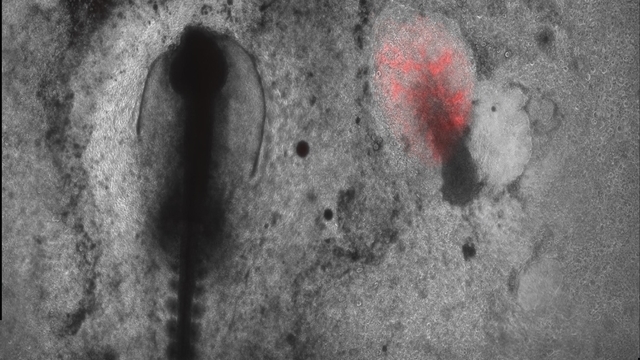 The organizer, a group of cells in the embryo that directs the developmental fates and morphogenesis of other embryonic cells, has been identified in human tissue for the first time, according to a study published today (May 23) in Nature. The discovery demonstrates that the organizer is evolutionarily conserved from amphibians to humans.

This is as close as we’ll get to a definitive demonstration that these principles and mechanisms apply in the human embryo.—Daniel Kessler,
University of Pennsylvania

“For many of us this was always the Holy Grail” of developmental biology, says Guillermo Oliver, the director of the Northwestern Feinberg School of Medicine’s Center for Vascular and Developmental Biology, who was not involved in the study. “The fact that now you can take stem cells and recapitulate those...

Rockefeller University embryologist Ali Brivanlou and colleagues report that when they grafted human stem cells that they’d treated with Wnt and Activin, two signaling proteins previously shown to be involved in organizer gene expression in other animals, into chick embryos, the grafted cells set off the developmental progress of the cells around them. The experiment establishes for the first time that the organizer exists in humans and that Wnt and Activin work in concert to make it possible for cells to direct embryonic development.

The search for the organizer, and with it the field of modern embryology, began nearly a century ago. Hilde Mangold, a PhD candidate in the lab of German zoologist Hans Spemann, wrote a dissertation in 1924 that described the organizer for the first time. Mangold and Spemann observed a distinct shape and morphology in some of the cells along the neural axis—the portion of the embryo that will become the central nervous system and one of the first structures to form during development—in a salamander embryo. When they grafted these cells from one embryo to another, the transplanted cells induced the formation of a second developmental axis in that embryo. Spemann would go on to receive the 1935 Nobel Prize in Physiology or Medicine for the discovery; Mangold died before then in an accident.

“That really revolutionized embryology because it provided a transition point between embryology being a descriptive science . . . to manipulating it,” says Brivanlou. It prompted developmental biologists to ask questions such as where in the embryo the information to create different organs is hidden, he adds. But these questions would remain unanswered for the better part of a century.

It was not until the mid-1990s that advances in molecular biology and genetics would make it possible to investigate the signaling pathways involved in these processes. In a landmark study published in 1998, University of Cambridge geneticist John Gurdon and colleagues showed that Wnt and Activin are involved in controlling the gene expression that gives rise to the organizer in frog embryos. Then, in 2000, Kira Gristman, a cell biologist at Albert Einstein College of Medicine, implicated the Nodal signaling pathway in patterning the organizer. And in 2007, Patrick Tam, an embryologist at the University of Sydney, showed that in mouse embryos these signals were coming from extraembryonic tissue—the structures that surround and support the embryo as it develops.

The stage was set for Brivanlou and his colleagues to identify the source of the human organizer. In 2014, by treating human embryonic stem cells grown on discs with bone morphogenesis protein 4 (BMP4, so named because this class of growth factors was originally found to induce bone and cartilage development), they caused the cells to differentiate and organize themselves into concentric rings of embryonic tissue layers. Using RNA sequencing, the team found that BMP4 turns on one gene, Wnt3, which then stimulates NODAL expression. They had identified the signaling pathway that gives rise to the organizer, and in doing so had demonstrated that it is evolutionarily conserved across species. 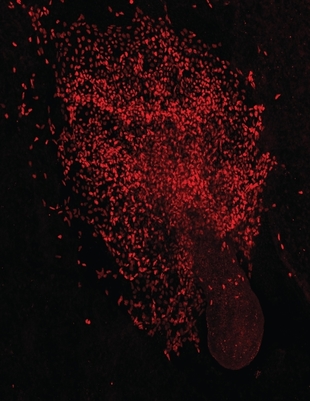 In this latest experiment, when they grafted human embryonic stem cells that they treated with Wnt and Activin into chick embryos, the stem cells caused the cells around them to begin forming a second neural axis as a line of cells running along one side of the embryo. This effectively demonstrated that Wnt and Activin signaling trigger some of the cells in early human embryos to become the organizer. Brivanlou and his colleagues had recreated Mangold and Spemann’s 1924 experiment, and had done so by manipulating pluripotent human cells to act as the organizer.

“The beautiful thing about this is that [Brivanlou] . . . has really used cutting-edge approaches to demonstrate that this idea of the organizer, and specifically the genetic and molecular mechanisms that have been described across animal systems, can be employed in the human system,” says Daniel Kessler, a developmental biologist at the University of Pennsylvania who was not involved in the study. “This is as close as we’ll get to a definitive demonstration that these principles and mechanisms apply in the human embryo.”

The discovery could lead to advances in stem cell applications in medicine, says Kessler. “The natural mechanisms that will . . . allow us to direct stem cells to specific cell fates—the genes, the signals, the spatial [and] temporal control—are the ones that will be used most effectively in in vitro systems where we try to direct stem cells to useful fates, which could then be potentially used in a therapeutic setting,” he says.

Oliver agrees. “Now we have the advantage that you can use induced pluripotent stem cells derived from patients,” he adds. “Eventually you can try to use it to mimic this process from patient-derived tissue” and determine how genetic mutations cause disease. “That’s the major breakthrough today.”

Brivanlou says the discovery could be the beginning of a revolution in regenerative medicine. “I think the clinic in the future is not going to be fixing things, it’s going to be replacing them,” he says. “In order for this to happen, we need to know about the origin of things.”

But the discovery also has deeper meaning to him. “Human beings have always been interested in their own origins,” he says. “The amazing ability that we now have to look at our earliest moments of development and genesis is something that, to me, is as attractive—if not more—as looking at the pictures from the Hubble telescope.”