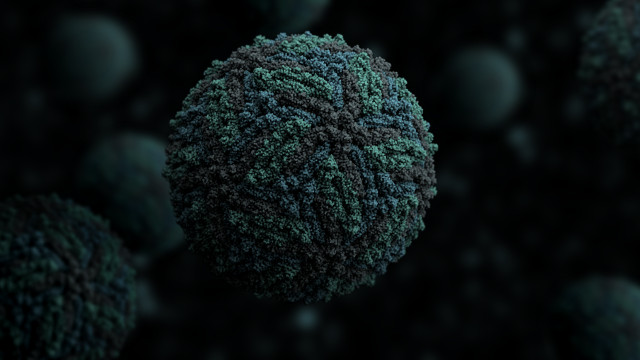 3-D representation of Zika virionWIKIMEDIA, MANUEL ALMAGRO RIVASA more-severe dengue virus infection can occur in an individual previously exposed to a different dengue virus serotype. Researchers theorize that this more-severe secondary infection occurs because circulating anti-dengue antibodies are cross-reactive, helping virions of a different viral serotype invade and replicate within host cells. This phenomenon is known as antibody-dependent enhancement (ADE). Whether existing antibodies to dengue could enhance infection by another flavivirus, Zika, in humans remains an open question. However, researchers from the Icahn School of Medicine at Mount Sinai in New York City have now demonstrated that ADE occurs in immunocompromised mice infected with Zika. The team’s results were published today (March 30) in Science.

“This is an excellent piece of fundamental science addressing the question of antibody-dependent enhancement in mice,” said Nelson Michael, an HIV researcher at the Walter Reed Army Institute of Research...

“Most of the evidence of Zika enhancement that exists up to now is from in vitro experiments, while this paper looks at outcomes in mice,” Isabel Rodríguez-Barraquer, an epidemiologist at the Johns Hopkins Bloomberg School of Public Health in Baltimore, wrote in an email to The Scientist.

Mount Sinai’s Jean Lim, Florian Krammer, Adolfo Garcia-Sastre, and their colleagues collected plasma samples from more than 200 people who were previously infected with dengue or West Nile virus, a more distantly related flavivirus, and who tested positive for IgG antibodies against either pathogen. In vitro, these plasma samples bound to Zika envelope protein, whereas samples from people who did not test positive for antibodies against these flaviviruses did not. The researchers observed signs of ADE when they added the plasma samples to cultured human cells expressing the Fc cell surface receptor, but not when the interaction between the cells’ Fc receptors and the antibodies were blocked. Depleting IgG antibodies from the plasma, the researchers did not see signs of enhanced infection. These experiments suggested that the IgG antibody-Fc receptor interaction is important for these cells to internalize the attached virions, which results in ADE.

“This is the first small animal model for ADE in which a clinical fever has been observed,” Lim said. “This is a clinically relevant disease outcome that told us our model is a good one to study ADE.”

The team found that its in vivo results were concentration-dependent: higher concentrations of dengue-exposed plasma appeared to protect against Zika infection, while lower concentrations resulted in more-severe symptoms and decreased survival.

For Michael Diamond, who studies mosquito-borne human pathogens at Washington University in St. Louis, the next question is whether ADE will also occur in fetuses exposed to maternal antibodies against dengue or other flaviviruses. Another key question, wrote Diamond in an email to The Scientist, would be whether ADE of Zika occurs if mice are first vaccinated against—or infected with dengue—and then challenged with Zika.

Researchers involved in Zika virus vaccine development see these as informative mouse experiments that may or may not be relevant in humans. “This study doesn’t considerably change how we plan to develop Zika vaccines,” said Stephen Thomas, chief of the division of infectious diseases at the State University of New York Upstate Medical University. “The message is that theories of immune enhancement need to be prospectively studied in humans.”

The next step is to complete ongoing epidemiological studies to determine whether Zika infection is enhanced in people who had been previously infected with another flavivirus, noted Michael. “Then we can go back to the animal models and ask which one was most predictive of what we saw in people. And that’s where we’re heading pretty quickly.”

Rodriguez-Barraquer agreed. “Since experiments like the ones in this paper can’t be conducted in humans directly,” she wrote, “careful analysis of new and existing epidemiological data around the world are needed to gain understanding of whether Zika enhancement by dengue antibodies is relevant in human populations.”