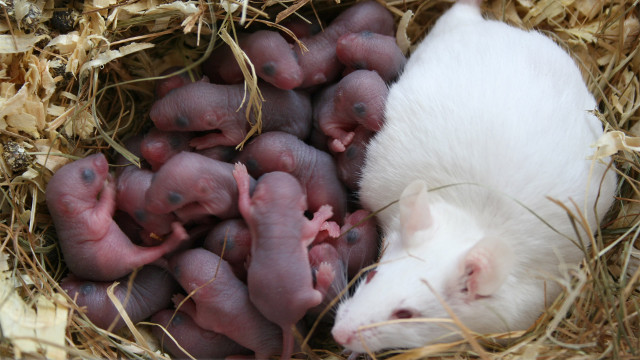 WIKIMEDIA, SEWERYN OLKOWICZWhile studying the role of Elabela (Ela), a recently discovered micropeptide present in mammals and fish, scientists have discovered that the protein protects pregnant mice from proteinuria and hypertension—two hallmarks of preeclampsia, a pregnancy-related condition, in humans. Reporting their findings in Science today (June 29), the researchers also reveal that treating the preeclamptic mice with a synthetic version of Ela resolved the animals’ symptoms.

“As a researcher working in this field, the model developed by [the authors] represents an exciting new avenue towards the understanding of the complex pathophysiology of preeclampsia,” women’s health researcher Guillermina Girardi of King’s College London writes in an email to The Scientist. “I am particularly enthusiastic about this model as it demonstrates most of the clinical features found in human preeclampsia,” she adds.

Preeclampsia, characterized by high levels of protein in the urine and increased blood pressure, affects somewhere between five...

Developmental biologist Bruno Reversade of the Institute of Medical Biology in Singapore did not set out to study preeclampsia, he says. Instead, his lab was investigating the function of Ela—a newly identified micropeptide (also known as Toddler) that had been previously overlooked because of its small size.

Early studies of Ela had ascertained that, in humans, the protein was present in the blastocyst and a handful of adult tissues including the placenta and kidney, and that, in zebrafish, deletion of Ela caused severe heart and blood vessel malformations.

In the present study, Reversade and his team extended their investigation of Ela to mice. They showed that during development the protein is first detected in the early placenta, becoming abundant later in placenta formation. They also showed that Ela is a pregnancy hormone, circulating in the blood of pregnant but not non-pregnant mice.

Genetic deletion of Ela in mice caused vascular abnormalities in both the developing embryos and their placentas, the team showed. Furthermore, RNA analysis of Ela-lacking placentas revealed a gene expression profile indicative of hypoxia, including the upregulation of certain genes involved in blood vessel building that have previously been shown to be upregulated in women with preeclampsia.

Given these gene expression findings and the fact that placental and vascular abnormalities have long been suspected to underlie preeclampsia, an obvious question, says Reversade, was, do these Ela-deficient mice exhibit preeclampsia?

Indeed they did. Pregnant Ela-lacking mice had significantly higher levels of protein in their urine and significantly higher blood pressure than either pregnant wildtype mice or non-pregnant Ela-lacking mice. And this heightened blood pressure returned to normal immediately after delivery. Furthermore, pups of Ela-lacking mothers tended to weigh less than those of wildtype mothers, similar to the fetal intrauterine growth restriction commonly seen in women with preeclampsia.

The team went on to show that infusing recombinant Ela protein into the blood of Ela-deficient pregnant mice could normalize their proteinuria, blood pressure, and fetal weight.

“We are able to rescue all these clinical symptoms by administering synthetic Ela in the knockout mice, so it’s not just that we have a new model [of preeclampsia], we have a potential therapeutic,” Reversade says.

“This placenta-derived hormone might be a good therapeutic option to improve placental development to prevent preeclampsia,” agrees Girardi. “I look forward to seeing the validation of these results in humans.”

“The bottom line is that this is an exciting discovery for the field,” says professor of medicine Ananth Karumanchi of Harvard Medical School. “It allows us to focus on a new physiological molecule that regulates the [fetal and maternal] vasculature, but I think we need more data in terms of how it works.”

“Like any big discovery,” he adds, “it opens a lot of new questions that many investigators will now work on to figure out.”