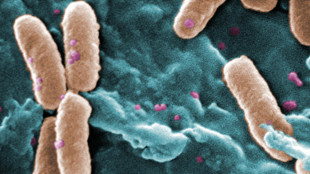 Scanning electron micrograph of Pseudomonas aeruginosaCDC, JANICE HANEY CARRCertain mutations that seem to confer antibiotic resistance in three different pathogenic bacterial species also provide a growth advantage and increased virulence during an infection, according to a study published in Science Translational Medicine today (July 22). While there are many well-known examples of antibiotic-resistance mutations that reduce bacterial fitness, scientists at the Brigham and Women’s Hospital and Harvard Medical School and their colleagues have found that some antibiotic-resistant pathogenic bacteria outgrow their antibiotic-sensitive counterparts, even in the absence of antibiotic selection.

“This study calls into question the concept that antibiotic resistance leads to less virulence,” said Stuart Levy, a microbiologist who studies antibiotic resistance at the Tufts University School of Medicine and was not involved in the study. However, he noted, this study is not the first to report evidence of mutations that both provide resistance and boost...

Many microbiologists have assumed that because antibiotic-resistant strains of bacteria are typically at a disadvantage when it comes to growth, halting the use of antibiotics could weed out such resistance, mitigating concerns tied to the rising numbers of drug-resistant infections. “[This study] leads to the question of whether that strategy would work,” said Amy Anderson, who studies anti-infective resistance at the University of Connecticut, but was not involved in the study. “If true, that has far-reaching implications.”

David Skurnik and Gerald Pier of the Brigham and Harvard and their colleagues sought to test whether any strains among a library of 300,000 transposon insertion mutants of Pseudomonas aeruginosa—a common cause of lung and other infections in hospital patients—resulted in a growth advantage in vivo. The team used its entire library of loss-of-function mutants to infect the lungs of mice, and then sampled the bacterial populations from the animals’ organs throughout the resulting infections.

Using DNA sequencing, the researchers found that insertion mutations in 116 genes were particularly abundant after at least 24 hours of growth in the murine models.  One of the mutations isolated affected the oprD gene, which were previously linked to antibiotic resistance in P. aeruginosa-infected patients. Another, in the glpT gene is known to confer resistance to antibiotics in Escherichia coli. Both genes serve similar functions: oprD encodes a channel that allows carbapenem antibiotics to enter bacterial cells, while glpT permits a different antibiotic, fosfomycin, to get into cells.

These transposon mutants—as well as two strains isolated from patients with P. aeruginosa—were more virulent compared to antibiotic-sensitive strains in the mouse lung infection models. The glpT mutant could even kill macrophages in vitro, the researchers found, suggesting that the antibiotic resistance may be linked to the ability of P. aeruginosa to evade attack by the host immune system. Moreover, transposon mutants in genes that normally provide intrinsic drug resistance had a growth disadvantage in the mouse models of lung infection.

The researchers demonstrated similar results in both Acinetobacter baumannii and Vibrio cholera. “The new picture emerging from this work is that antibiotic resistance is not [necessarily] associated with a fitness cost, and is even associated with an increased fitness and an increased virulence,” Skurnik told The Scientist.

The team’s results do not suggest that antibiotic resistance is always linked with increased virulence or fitness in these three, or other species of pathogenic bacteria. And they only pertain to the loss-of-function mutations examined. Whether gain-of-function mutations or plasmid-borne antibiotic-resistance genes have similar effects on bacterial fitness and virulence has yet to be seen.

“The results are interesting, but I don’t think the findings challenge the idea that most [antibiotic-resistance mutations] confer reductions in fitness when measured in vitro or in vivo,” Dan Andersson, who studies bacterial evolution at Uppsala University in Sweden and was not involved in the study, wrote in an e-mail to The Scientist. Whether the newly identified mutations are bona fide resistance genes also remains to be seen, he added.

Levy noted that there may be inherent differences in fitness and virulence of engineered transposon strains versus drug-resistant strains isolated by selection on antibiotics.

Still, even if the growth advantage is only for certain classes of drug-resistant strains, the work raises questions on how to maximize efforts toward the prudent use of antibiotics, said Pier. “The assumption that if we just stop using antibiotics, bacterial strains around now would disappear—because they are less able to cause infection—may be very simplistic and naive.”