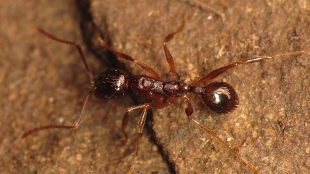 A. rudis antBEN COULTERAs climate change causes global temperatures to mount, warm-loving Aphaenogaster rudis ants in the Appalachian Mountains have marched skyward into the turf of their cold-adapted cousins Aphaenogaster picea, displacing the latter from its home on the mountain peaks of north Georgia. The findings, published last week (March 21) in Global Change Biology, could spell bad news for the Appalachian plant species that depend on these ant species to disperse their seeds throughout the woodlands.

“Spring ephemeral plants depend on ants to get their seeds out of harm’s way from predators, like rodents, and timing matters with these ant-plant mutualisms,” said Joshua King, an insect ecologist at University of Central Florida who was not involved in the research. “This work is really nice because it integrates a deep knowledge of the plant perspective with what is happening with the ants.”

The investigation began with...

So in 2012, Warren led a class from the Highlands Biological Station into the Appalachian Mountains to track down the original sampling sites. The researchers found that A. rudis had climbed upward and now accounted for nearly half of the Aphaenogaster living above 800 meters. Mid-elevations, where the two species had previously split distributions, were now completely dominated by A. rudis, suggesting the once low-lying species was pushing out the ants native to the higher altitudes.

Warren reasoned that even subtle change in regional climate might explain this population movement.While annual maximum temperatures in north Georgia have held steady over the last 30 years, annual minimum temperatures rose by nearly 2°C. Sure enough, laboratory studies conducted in collaboration with  Lacy Chick, a PhD candidate at the University of Tennessee-Knoxville, confirmed that A. picea thrive at temperatures about 2°C colder than A. rudis. “What seems like a small difference—just 2 degrees—is having a big impact,” said Warren.

The displacement of A. picea could affect certain forest ephemerals, such as Erythronium americanum (trout lilies), which bloom early in the spring just as A. picea are breaking their winter dormancy. A. rudis, however, do not become active until temperatures warm later in the spring, possibly altering the spread of seeds produced by early-flowering woodland plants.

Whether the A. rudis invasion took the form of an outright war between ant species, or whether it was a more subtle takeover that resulted from the efficiency with which each species used the available resources remains to be seen. Or perhaps the A. rudis ants are not conquering by force, but rather by genetics through the formation of hybrid communities with A. picea. Precedent for ant hybridization has been observed just two states over in Mississippi, where environmental and climatic factors are thought to have driven crossbreeding between exotic red fire ants and imported black fire ants. Warren plans to examine the genomes of the mountainous Aphaenogaster species to see if a similar merger has occurred. “We’re setting up genetic surveys on these samples to look for evidence of hybridization,” he said.

Interestingly, ants aren’t the only arthropods climbing in response to changes in microclimate. In Mexico, scientists have pointed the finger at higher temperatures to explain the expansion of the dengue virus endemic, but two of the country’s largest cities—Mexico City and Peubla—have been largely spared because of their high elevations at 2,000+ meters. However, one mosquito-vector for dengue—Aedes aegypti—was recently spotted in Peubla, nearly 300 meters higher than any previous recording.

“As climate change occurs, we expect species to migrate,” said Warren. “However, we need evidence to establish that climate change caused that movement.”