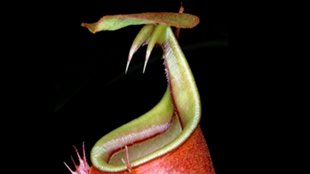 The swimming ant, Camponotus schmitzi, which lives exclusively on the fanged pitcher plant, Nepenthes bicalcarata, in Borneo, provides the plant with extra nutrients, at least in part by capturing and consuming parasitic mosquito and fly larvae that leach nutrients from the pitcher while developing inside it. Scientists once thought that the ant—which traverses the slippery rim of the fluid-filled pitchers while other insects fall in, drown, and are digested—was a parasite. But researchers over the last several years have suggested the ant could be doing the plant many small favors. A paper published today (May 22) in the journal PLOS One confirms that the ants and their plant homes are indeed engaged in a mutually beneficial relationship.

To confirm that the plants benefited from the ants, the researchers measured ratios of nitrogen isotopes in N. bicalcarata with and without...

“I think it’s a pretty good paper that directly shows that Nepenthes bicalcarata can get out some nitrogen from the presence of the ant,” said Vincent Bonhomme, an evolutionary biologist affiliated with the Center for Bio-Archaeology and Ecology at University Montpellier 2 in France who was not involved with the study.

In many ant-plant relationships, ants bring their hosts nutrients from the outside world. But in hundreds of hours of observation the researchers almost never saw C. schmitzi leave their plant homes.

Mathias Scharmann, a coauthor of the paper and a biologist at ETH Zürich in Switzerland, hypothesized that the ants were killing and eating the parasitic insect larvae that grow in the nutrient-rich water that collects in the plant’s pitchers.

First the team observed the numbers of larvae hatching and emerging from the pitcher plants and found that certain species of flies and mosquitoes were more likely to emerge from ant-free plants than plants with C. schmitzi colonists. This indicated that ant-free plants were more often successfully parasitized, with larvae surviving and hatching into adults, which ultimately robs the plants of nutrients.

They then collected mosquito larvae, placed them in the pitchers, and took video recordings. Sure enough, the ants were swimming inside the pitcher, grabbing the larvae with their mandibles or legs, and then swimming backwards to drag the struggling larvae out of the pitcher, where they died and the ants likely ate them. The ants also attacked syrphid fly larva placed in the pitchers. “The ants go after them and hunt them,” said Scharmann. “It’s really quite vicious.”

The plants got the nutrients back in the end, the researchers hypothesized, via ant feces and ant carcasses when their colonists eventually died. Indeed, when the researchers fed ants with labeled nitrogen, it turned up in the plants’ tissues.

The work only demonstrated one way the ants could help the plant, Scharmann said. Previous research has indicated that the ants keep the slippery lip of the pitchers clean, causing more prey to accidentally fall in. Ants also have been shown to ambush prey as it falls into the pitchers, preventing it from escaping.

Vincent Bazile, an evolutionary biologist and ecologist at the University Montpellier 2, said in an email to The Scientist that he was convinced that the ants were helping the plants digest drowned prey by feeding on them and breaking them apart. Compared to other pitcher plants N. bicalcarata pitchers have unusually weak acidity, and they might otherwise fail to dissolve dead insects completely. Nevertheless, he said that the paper revealed “a new facet of mutualism between the swimming ant and the fanged pitcher plant.”

Scharmann, who originally came to Borneo to study the biomechanics of how the ants walk on the pitcher plant rim, dive in the water, and swim, said he was pleased to now understand that these unusual behaviors are part of a complex mutualism. The ants and pitcher plants “are completely different and both are after their own benefit,” he said. “But still they can cooperate.”