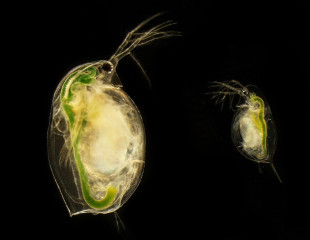 Adult female Daphnia magna (left) and D. dentifera (right)ISABELLA OLESKY (COURTESY OF CATHERINE SEARLE)Chytridiomycosis, the deadly disease caused by the fungal pathogen Batrachochytrium dendrobatidis (Bd), has been decimating amphibian populations worldwide since the 1980s. “We have no means to stop its advance,” said Antje Lauer, a microbial ecologist at California State University in Bakersfield, “and no cure that can be used in the wild to protect amphibians from it.”

But new research suggests a potential preventive agent against Bd infection—one that may already be swimming all around the affected amphibians. Two recent studies demonstrated that aquatic microscopic fauna—such as...

Dirk Schmeller, a conservation biologist at the Helmholtz Centre for Environmental Research in Germany, knew that Bd infection rates varied greatly across frog populations in lakes within the Pyrenees mountains, between France and Spain. Curious “if there was something in the water” skewing Bd infection rates, Schmeller—with the help of a hardy donkey—transported various lake water samples to his lab for a series of experiments he and his colleagues published in Current Biology last month (December 26).

Schmeller’s team found that low-Bd lake water contained more microscopic fauna than high-Bd lake water. These microfauna were mostly single-celled organisms like Paramecium and rotifers, which feed on organic matter they filter from their aquatic environments.

The team then placed tadpoles of the European midwife frog (Alytes obstetricans)—a species that’s known to be highly susceptible to chytrid fungus—in samples of low-Bd lake water and added high Bd-loads. Some of the water samples were heat-treated to remove all microfauna. The researchers found that Bd infected fewer tadpoles and with milder intensity in the untreated water. They also found that tadpoles in low-Bd water without microfauna suffered infection rates equal to those observed in high-Bd water.

Next, Schmeller and his colleagues labeled Bd zoospores with a fluorescent stain to track their fates in the presence of microfauna. Many of the glowing Bd zoospores ended up in the guts of the microfauna, providing direct evidence that the aquatic filter-feeders were eating the Bd zoospores.

Catherine Searle, a disease ecologist at University of Michigan, attempted to address that question in an Ecology and Evolution paper published this past fall (September 23). She and her colleagues sought to see whether Daphnia magna and the smaller D. dentifera could consume Bd zoospores and reduce Bd infection among tadpoles when also provided with an alternative food, algae.

Although both Daphnia species decreased Bd zoospores in the water, only D. magna appeared to help reduce Bd infection in tadpoles. Searle’s team hypothesized that the faster filtering by the larger D. magna might have damaged Bd zoospores more than the smaller D. dentifera could.

“The effects of Daphnia on Bd are not straightforward,” explained Searle, noting that Daphnia may not always reduce chytridiomycosis. “It’s complicated.”

The works of Schmeller and Searle highlight the potential of aquatic predators to fight Bd. “Aquatic predators of fungal zoospores are exciting,” said Douglas Woodhams, a disease ecologist and conservation biologist at University of Colorado, Boulder, “because they are the one factor that may be more easily manipulated for disease management” when compared with factors like pond temperature or host immunity.

However, Searle warned that “biocontrol must be implemented with caution for it might have unpredictable effects on the community.” Schmeller agreed, suggesting that biocontrol trials “should [first] be done in a couple of lakes—definitely not more than that—to see if they work.”

“The studies of Schmeller and Searle remind us that host and pathogens do not exist in a vacuum,” said Voyles, “but are parts of diverse, dynamic ecosystems with many interfering organisms, chemicals, and abiotic factors.”

Added Lauer: “These studies make clear that a healthy environment with natural predators of Bd can reduce the risk of contracting chytridiomycosis.”

C.L. Searle et al., “Daphnia predation on the amphibian chytrid fungus and its impacts on disease risk in tadpoles,” Ecology and Evolution, 3: 4129–38, 2013.