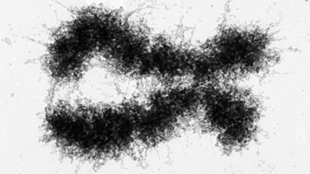 Human chromosome.Hans RisGenome sequencing projects have provided rich troves of information about stretches of DNA that regulate gene expression, as well as how different genetic sequences contribute to health and disease. But these studies misses a key element of the genome—its spatial organization—which has long been recognized as an important regulator of gene expression. Regulatory elements often lie thousands of base pairs away from their target genes, and recent technological advances are allowing scientists to begin examining how distant chromosome locations interact inside a nucleus.  The creation and function of 3-D genome organization, some say, is the next frontier of genetics.

Genome spatial organization is critical for gene regulation, explained Job Dekker, a molecular geneticist at the University of Massachusetts Medical School, and “everything else chromosomes do involves three dimensions,” as well. Chromosomes have to replicate, separate properly during division, and change shape during the cell cycle—all...

The mechanisms for such delicate orchestration have remained unclear, however. About 10 years ago—just as the human genome project was completing its first draft sequence—Dekker pioneered a new technique, called chromosome conformation capture (C3) that allowed researchers to get a glimpse of how chromosomes are arranged relative to each other in the nucleus. The technique relies on the physical cross-linking of chromosomal regions that lie in close proximity to one another. The regions are then sequenced to identify which regions have been cross-linked. In 2009, using a high throughput version of this basic method, called HiC, Dekker and his collaborators discovered that the human genome appears to adopt a “fractal globule” conformation—a manner of crumpling without knotting.

In the last 3 years, Dekker and others have advanced technology even further, allowing them to paint a more refined picture of how the genome folds—and how this influences gene expression and disease states.

Dekker’s 2009 findings were a breakthrough in modeling genome folding, but the resolution—about 1 million base pairs—was too crude to allow scientists to really understand how genes interacted with specific regulatory elements. More detail was needed to understand how cells know which areas of the genome “should be talking [to each other], and which shouldn’t,” said Dekker. After all, “you don’t want everybody talking to each other; you want [your genome] to have a decent conversation.”

Recent advances in deep sequencing are now providing researchers with a way to glean that detail. Dekker and his colleagues discovered, for example, that chromosomes can be divided into folding domains—megabase-long segments within which genes and regulatory elements associate more often with one another than with other chromosome sections. The DNA forms loops within the domains that bring a gene into close proximity with a specific regulatory element at a distant location along the chromosome. Another group, that of molecular biologist Bing Ren at the University of California, San Diego, published a similar finding in the same issue of Nature.

Between the two groups, the researchers identified these domains in mouse and human embryonic stem cells and human fibroblasts, suggesting that they are “a fundamental property of the genome,” Ren said. Additionally, both groups found that deleting boundary sections of domains threw gene regulation into disarray, causing previously silent genes to be transcribed and vice versa. These results demonstrate that “domain structure is essential to keep the gene program tightly regulated,” said Ren.

“I think the discovery of [folding] domains will be one of the most fundamental [genetics] discoveries of the last 10 years,” Dekker said. The big questions now are how these domains are formed, and what determines which elements are looped into proximity.

In addition to its effect on gene regulation, chromosome folding may also play a role in cancer development. Somatic copy number alterations (SCNAs), or the deletion or amplification of genes, are a hallmark of cancer’s genomic instability. Leonid Mirny’s lab at Massachusetts Institute of Technology, who collaborated with Dekker on the 2009 discovery of “fractal globules,” found that the genome’s loops contribute to the formation of particular SCNAs. Comparing SCNA maps to the 3-D architectures of human cancer genomes, Mirny and colleagues found that genomic regions that formed the ends of the loop—and were therefore in close physical proximity—are likely to be boundaries where the intervening section is deleted or amplified, creating SCNAs.

Translocations, or the abnormal arrangements of chromosome sections, are another hallmark of certain cancers, and also seem to be facilitated by spatial organization. Mirny and his group found that the break points for two well-known translocations—Bcr-Abl in chronic myelogenous leukemia and between Myc and immunoglobulin genes in Burkitt’s lymphoma—are frequently found near each other in normal cells, and especially in cells of the lineages prone to these tumor types.

Tissue-specific differences in translocations may point to subtle differences in genome organization based on cell type. “Presumably in different tissue types there are specifics of the genome organization that we have yet to discover,” said Mirny. How differences in chromosome organization are achieved is another ripe area for study, said Dekker. For example, chromosome folding domains could be determined by some sort of marker in the cell, depending on type and environmental factors. “If boundaries to domains are flexible—turning on or off by cell type—suddenly genes have access to a whole new set of regulatory elements,” Dekker speculated.

In addition to better understanding cancer, chromosome folding may help predict it. As normal cells transition into tumor cells, genes can change their spatial organization in characteristic ways, said Tom Misteli, a cell biologist at the National Cancer Institute at the National Institutes of Health who is using the genome’s 3-D architecture to develop diagnostic tools. His team has shown that in breast cancer, certain genes “change position dramatically as their cells transform into cancer cells,” allowing Misteli and his colleagues to “look at an unknown tissue biopsy, localize genes, and with high accuracy determine whether its cancer or normal,” he said.