The Namib Desert, which runs along the western coasts of Angola, Namibia, and South Africa, appears from above like a crater-filled surface of an alien planet. Scattered throughout the region are circular formations of grass with conspicuously barren centers, called “fairy circles.” The circles have long been a mystery of science, but according to a study published today (March 28) in Science, they may indeed have an ecological purpose: preserving moisture. The researchers found that a species of sand termite eats the water-sucking grass in the circles’ centers, thereby conserving water in the soil to help protect the insects against their desert habitat.

“[It’s] like an oasis in the desert,” said Norbert Juergens, a biologist at the University of Hamburg and sole author of the paper, who found a host of ant-eating and plant-eating animals near the oases. Geckos, aardvarks, jackals, omnivorous ants—the termites’ bizarre behavior was supporting...

Without the termites, Juergens theorized, the desert would often be barren. Grass would grow with the rains, then rapidly use up all the water and die, creating a boom and bust cycle. The termites depend on a moist environment, and so to survive in the desert, they need a constant reservoir. Without plants to use it up, the water filters through the desert sand to a depth where it won’t evaporate. And with less competition, the grass along the perimeter of the circle grows lushly.

Researchers have previously proposed that ants or noxious gases coming up out of the earth could have made the circles. Recently, scientists speculated that the circles simply come from competition dynamics among grasses. To investigate the matter further, Juergens surveyed various species in the fairy circles across a 2,000-kilometer-long range from Angola to South Africa. He found that the sand termite, Psammotermes allocerus, was the most commonly shared factor among the fairy circles—they were the only species present in all of the fairy circle hotspot areas he visited. Moreover, he found the termites in fairy circles that were just beginning to form, and young grass was damaged at the roots near the termites’ underground nests. Juergens measured termite activity within each circle by looking at “soil dumps” left by the termites when cleaning out their nests, and found high termite activity in bare patches and low termite activity in the rings of grass.

Opinion is divided on Juergens’s theory. Mike Picker, a biologist at the University of Cape Town who had previously hypothesized that ants could be behind the fairy circles, was convinced the termites should receive most of the credit. But Walter Tschinkel, a biologist at Florida State University, emphatically disagreed. He said in a critique circulated by email that he was not convinced that termites even eat live young grass, nor that they would be capable of killing it. “It seems more likely that the fairy circles (cause unknown) cause the presence of termites, not the other way around,” he wrote.

Juergens said that he would prefer if he could have performed a more airtight demonstration of the termites’ role, such as ridding the fairy circles of the termites and seeing if the circles persisted. But the desert environment was just too harsh and the termite nests too extensive for such a project, he said. “I hope we can come up with proper proof in the form of an experiment.” 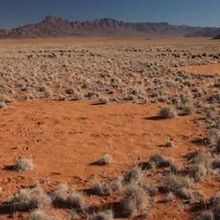