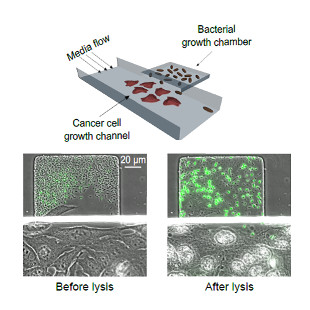 Schematic of the microfluidic device used to co-culture engineered bacteria and cancer cells (top). Live co-culture of engineered bacteria and cancer cells immediately before and after the synchronized lysis event, showing cancer cell death (bottom left, right, respectively).JEFF HASTY, UC SAN DIEGOA synthetic genetic circuit programmed into an attenuated Salmonella enterica subspecies can be used to systemically deliver an anti-tumor toxin into mice with cancer. The circuit allows the bacterial cells inside a tumor to synchronously self-destruct by lysis, releasing the toxin directly in the tumor. The treatment of mice with the engineered bacteria is described by researchers at the University of California, San Diego (UCSD), today (July 20) in Nature, pointing to a way to harness bacteria for cancer drug delivery.

“This impressive study represents a big step towards one of the great dreams of synthetic biology: rationally programming cells, in this case bacteria, to exhibit...

Bert Vogelstein, a cancer geneticist at the Johns Hopkins’ Sidney Kimmel Cancer Center in Baltimore who also was not involved in the work, agreed. “This paper describes a highly innovative strategy employing synthetic biology to weaponize bacteria and shows that these bacteria can be used to slow the growth of tumors growing in mice,” he wrote in an email to The Scientist.

The idea of using bacteria as a cancer therapy is more than 100 years old. “And attempts to engineer bacteria for therapeutic and other purposes are also many,” said Shibin Zhou, an associate professor of oncology at Johns Hopkins, who penned an accompanying perspective. “What is new here is a genetic circuit that allows synchronized production and release of a toxin in repeated cycles by the engineered bacteria.”

Jeff Hasty, a professor of biology and bioengineering at UCSD, and his colleagues had previously developed a simple genetic circuit in Escherichia coli consisting of a positive feedback loop. The circuit produces a small molecule autoinducer—AHL, which is secreted by the bacteria and diffuses to neighboring cells—as well as a green fluorescent protein (GFP) reporter from the same promoter. Another downstream gene under the same promoter encodes a protein that degrades AHL, forming a negative feedback loop. The circuit allows the cells to go through multiple cycles of GFP bursts that can be viewed under the microscope when the cell population reaches a critical mass and produces enough AHL.

For the present study, the team modified the circuit to include a gene expressing an anti-tumor toxin—haemolysin E, which accumulates inside the cell—and a gene for a bacteriophage protein that lyses bacteria. Once the AHL reaches a critical level, the bacteriophage lysis protein is expressed, kick-starting a negative feedback loop, allowing the cells to go through a cycle of growth followed by lysis when a population threshold is reached, leaving behind only a few surviving cells.

The researchers challenged cervical tumor cells in a microfluidic device with the engineered bacteria and saw that, following bacterial lysis, the tumor cells were killed, about 111 minutes after the initial GFP activity. The team also created similar circuits but substituted haemolysin E with either a gene to activate murine T cells or to trigger tumor apoptosis.

Injecting the bacteria expressing the immune-activating gene directly into the tumor was the most effective in deterring malignant growth in a colorectal cancer mouse model, the researchers found.

Next, Hasty and colleagues orally administered a mixture of all three bacterial strains to mice with colorectal tumor metastases, and simultaneously treated the animals with the chemotherapy drug 5-fluorouracil (5-FU). The team found that this combination increased overall survival of the mice compared to either chemotherapy or the bacterial strains alone.

To Elowitz’s mind, the work is part of an ongoing paradigm shift of replacing molecular therapies with cell-based ones. “Using cells makes a lot of sense if you think about the many things that cells can do that molecules can’t: control their own proliferation and death and the synthesis and release of toxins to kill other cells,” he wrote.

“The combination therapy didn’t result in tumor eradication,” noted Zhou. “But the idea that you can engineer this type of circuit is really forward-thinking and a proof of concept that could be applied not only to cancer, but also to other diseases.”

Elowitz agreed. “Even this relatively simple genetic circuit built out of just a handful of genes can be amazingly powerful. As we learn to design and construct genetic circuitry better, it should become possible to program cells to perform an almost unlimited variety of computations and behaviors.”

One major question, according to Elowitz, is how to reliably get the synthetic bacteria to efficiently home to the diseased tissue or organ while not harming healthy tissue.

Hasty’s team is now working to develop a modified strain that, rather than cycling through growth and lysis phases on its own, can be killed and mopped by the delivery of a subsequent dose of the bacteria.