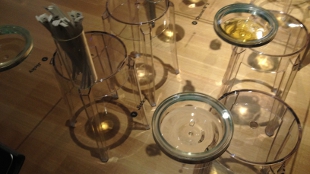 The Art of Scent's featured fragrances, of which exhibit-goers are invited to take a whiffIMAGE: ALLA KATSNELSONHow do you create an exhibit for a completely invisible art form? A new show at New York’s Museum of Art and Design struggles admirably with this question.

The Art of Scent guides visitors through the historical arc made by 12 fine fragrances representing major aesthetic schools of olfactory art over the past 130 years. In the late 1800s, perfume-making underwent a revolution. Scents had always been made from natural substances—oils and essences as well as fixatives made from animal products such as ambergris (a waxy material from the intestine of a sperm whale) and castoreum (a secretion from the anal gland of beavers).  But as commercial chemists got better at synthesizing molecules for all sorts of purposes, perfume-makers couldn’t help but notice that some of those molecules tickled the nostrils....

“These were the two fundamentally important works that actually began scent as art,” says Chandler Burr, the museum’s curator of olfactory art. “Scent before this was always captive to the limits of nature.” The stranglehold wasn’t just due to the absence of synthetics, he says. It was also conceptual; recreating nature had always been the aesthetic goal, as with other art forms such as painting.

An ever-expanding stock of building materials has driven scent artists to push the boundaries of olfactory creation. One landmark example the exhibit provides is L’Oreal’s Drakkar Noir, launched in 1982. The perfume’s creator, Pierre Wargnye, “did something that was absolutely extraordinary,” says Burr: he put in a cheap, smelly molecule called dihydromyrcenol, which was widely used to scent laundry detergents. Much like the art critics who initially objected to Pop Art’s depiction of Campbell’s soup cans and street signs, perfume insiders were enraged by the notion of using an industrial chemical in a fine fragrance. “They said, ‘You can’t do this – it’s not appropriate subject matter!’” Burr says.  Just a few years after its debut, however, Drakkar Noir was deemed one of the most successful male fragrances of all time.

One of the exhibit's olfaction hollowsIMAGE: ALLA KATSNELSONBut despite the fascinating chemical tales behind each of the works in the exhibit, The Art of Scent is as much an exploration of how humans experience this most primal of our five senses. Olfaction is buried so deep in our limbic brain that it largely confounds linguistic analysis. Try to convey the qualities of an unfamiliar smell, and all too often you’ll find yourself grasping at ghostly and un-nameable sensations. And yet, perhaps because of the lack of a shared vocabulary that each of us can call on to describe an olfactory encounter, scent is a communal affair. “In my experience, the way that people process scent, the way that they understand it, is by talking with each other,” Burr says. What do you smell? Do you like it? What does it remind you of?

This reasoning drove Burr and visionary architect Elizabeth Diller, who worked with him on the exhibit’s design, to separate the show into two semi-darkened rooms. In the first, visitors can lean their heads into the twelve hollows positioned along the periphery of three beige walls and encounter each work of art in the puff of scented air emitted by a silent and invisible vaporizer. Notes on each piece, written in white light, intermittently appear and fade away. The room is remarkable for an almost complete absence of angles and corners, effectively giving the eye next to nothing to rest on and thus giving the nose free rein.

In contrast to this air of meditative silence, the second room—much smaller, with a glass table in the center holding samples of the featured scents along with dipping tabs—generates a much more interactive ethos. Facilitators positioned throughout the room guide exhibit-goers in describing their response to the works, and iPads set up at the table provide starting lists of descriptors. Take your time lingering over each scent, or have a look at the display on the far wall that breaks down the process of shaping a perfume from molecular building blocks and intermediary scents.

We come to museums, typically, to see. The Art of Scent provides a unique venue to explore a sense less-traveled.

The Art of Scent, which opened November 20, will be on view until February 24, 2013 at the Museum of Art and Design, 2 Columbus Circle, New York, NY.