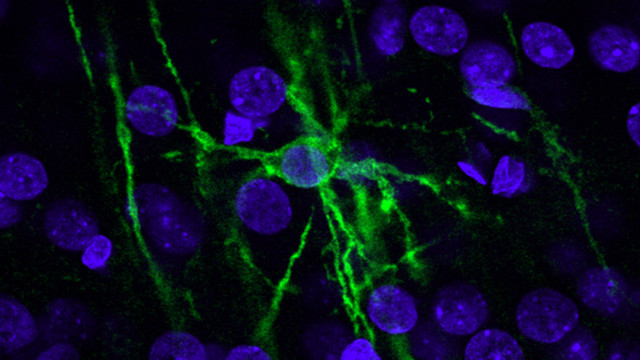 Oligodendrocytes (green) in adult mouse brainWIKIMEDIA, OLEG TSUPYKOVNeurodegenerative diseases are often associated with aging. To learn what happens within the aging brain and potentially gain information relevant to human health, researchers examined gene-expression patterns in postmortem brain samples. Overall, the researchers found, gene expression of glial cells changed more with age than did that of neurons. These gene-expression changes were most significant in the hippocampus and substantia nigra, regions damaged in Alzheimer’s and Parkinson’s diseases, respectively, according to the study published today (January 10) in Cell Reports.

“Typically we have concentrated on neurons for studies of dementia, as they are the cells involved in brain processing and memories. [This] study demonstrates that glia are likely to be equally important,” study coauthors Jernej Ule and Rickie Patani of the Francis Crick Institute and University College London wrote in an email to The Scientist.

See “Into the Limelight...

“The authors’ effort in this comprehensive work is a ‘genomic tour de force,’ showing that, overall, non-neuronal cells undergo gene expression changes at a larger scale than previously thought in aging,” Andras Lakatos, a neuroscientist at the University of Cambridge, U.K., who was not involved in the study, wrote in an email. “This finding puts glial cells again at the center stage of functional importance in neurodegenerative conditions in which aging carries a proven risk.”

Previously, scientists had produced conflicting results about how populations of glial cells—including astrocytes, which feed neurons; microglia, the brain’s immune cells; and oligodendrocytes, which form myelin sheaths—change as the brain ages. According to the authors, the present study, which used array-based gene–expression data and tissue samples from the UK Brain Expression Consortium and the North American Gene Expression Consortium, represents the largest analysis of aging and gene expression in the human brain.

The researchers examined gene-expression data from 10 brain regions of 480 brain samples from people who died at ages ranging from 16 to 106 and who had not been diagnosed with neurodegenerative disease. Based on previous data about the genes expressed by different cell types, the team sorted the expressed genes into those specific to neurons and those specific to glia. Gene expression changed to a greater extent with age in glial cells than in neurons, the researchers found. Generally, neuron- and oligodendrocyte-specific genes showed decreased expression with age, while the expression of microglia-specific genes increased with age. The expression changes of astrocyte-specific genes was more complex—increasing with age in some brain areas and decreasing with age in others.

To determine whether age-related changes in neuronal and glial cell numbers affected gene expression results, the researchers used imaging to count various cell types in tissue samples from the frontal cortices of young and older brains. Consistent with the gene-expression results, the number of oligodendrocytes decreased with age. The number of large neurons also decreased with age. The researchers concluded that the gene-expression changes in neurons and oligodendrocytes are attributable both to changes in cell number and to expression levels in individual cells.

The expression of glial cell–specific genes was a better predictor of age than that of neurons, the researchers found, underscoring the relevance of non-neuronal cells to aging. As people aged, the gene expression patterns of glial cells in different brain regions became more and more similar, as if the glial cells were losing their region-based identities, the authors noted.

“Glial cells appear to have something of an identity crisis as we age, as their expression patterns become more similar across the brain,” Ule and Patani wrote.

This effect was strongest in the hippocampus and substantia nigra. “For example, the oligodendrocyte-specific genes are expressed in very different pattern[s] for these two regions in young brain, but in the old brain they gain a similar pattern,” the coauthors noted.

Overall, said Ule and Patani, the results of this study suggest that “scientists should put greater focus on the interactions of neurons with glia in future studies of Alzheimer’s and Parkinson’s disease.”