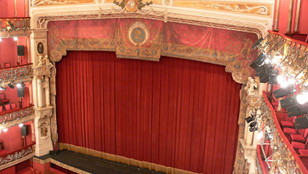 WIKIMEDIA, ANDREAS PRAEFCKEJoão Paulo André went to his first opera as a third-year student studying chemistry at the University of Coimbra in Portugal. “I saw La Traviata, and I was so impressed,” he says. Since then he has faithfully read about and attended operas while pursuing his chemistry career.

In November 2011, André combined his two passions creating a multimedia lecture that explores the roles of chemical compounds and practitioners of the science in opera plots. To his surprise, he has now given the lecture six times at Portuguese museums and universities, as well as at schools for younger students. “I never expected such a wonderful response,” he says, adding that both chemistry and opera can be tough sells for audiences.

In a paper published earlier this year (January 14) in the Journal of Chemical Education, André, who is now a professor at the University of Minho...

According to André, the pairing is a natural one, as opera actually chronicled the heady, early days of chemical discovery. Joseph Haydn’s Der Apotheker (also known as Lo Speziale) and Gaetano Donizetti’s one-act opera, Il Campanello, for example, both featured pharmacists as main characters. In 1768, as Joseph Priestley, Antoine Lavoisier, and Carl Wilhelm Scheele, who would eventually discover oxygen, were immersed in their chemical labors, Haydn debuted Der Apotheker, a story about competition and love that plays out in the pharmacy. “There was something in the air. Chemistry was coming to be called a modern science,” Andé says. Il Campanello was first performed publicly in 1836, a time when many natural compounds were being isolated. It includes songs about long, complicated prescriptions. These “apothecary operas” illustrate the cultural pull chemistry used to have.

Il Campanello is a comical one-act story in which the elderly pharmacist Don Annibale repeatedly fails to consummate his marriage to a young beauty because her former lover Enrico keeps coming to the pharmacy and demanding complicated prescriptions. In this song, Enrico pretends to be an opera singer with a cold.

Along with chemists and pharmacists, chemicals themselves play important parts in some operas. A surprising number of operatic pieces feature a single chemical mixture: a cocktail of the anticholinergic tropanic alkaloids scopolamine and hyoscyamine. Those chemicals can bind to and block acetylcholine receptors and cause a wide range of symptoms, including flush, disorientation, tachycardia, coma, or death.

The toxic mixture appears in Charles Gounod’s Romeo and Juliet (1867) as the mandrake that sends the lovestruck heroine into a coma-like sleep, in Léo Delibes’s Lakmé (1883) as the Datura stramonium flower the title character uses to commit suicide, and in Giacomo Puccini’s Suor Angelica (1918) as belladonna in a poisonous cocktail. A 2003 British Medical Journal article even argues that, in Richard Wagner’s Tristan and Isolde (1865), the two main characters drink a love potion made from the same class of compounds. How can the same chemicals play so many different roles in opera plots? “It all depends on the doses,” André says.

In Suor Angelica, the main character gets pregnant out of wedlock, her child is taken away, and she is sent to a nunnery. When she finds out her child has died, she poisons herself with plants, singing, “Oh, friendly flowers, you are fair compensation for all the sorrows flung on me by love! Come, oleander. Where art thou, darkest laurel? Beautiful nightshade, come! ‘Tis now thy turn, oh powerful, bitter hemlock.” (Translation from Stanford’s site OperaGlass)

Jorge Calado, a retired Portuguese chemistry professor and an opera critic for the Portuguese newspaper Expresso, saw André’s talk and helped edit the Journal of Chemical Education paper. “I thought [the lecture] was excellent,” he says. “His ideas really took off … People who had never seen an opera got excited about it.”

Calado published a book in Portuguese in 2011 whose title translates to Let There be Light! A History of Chemistry Through Everything, in which he tells the story of chemistry’s early roots through the lens of the arts and humanities, including opera.

He says that André’s paper made him want to write his own follow-up paper, and that he could think of even more examples of operas with connections to chemistry—from Jacques Offenbach’s Le Docteur Ox (1877), based on a story by science fiction writer Jules Verne, to John Adams’ Doctor Atomic (2005), which chronicles the creation of the atom bomb in Los Alamos.

Calado adds that it is important for students to learn to draw parallels between disparate disciplines. It strengthens their ability to be scientifically creative, and it improves their knowledge of both subjects.

André shares Calado’s sentiment. “I have been giving a different view of both opera and chemistry. It shows to people that nothing is really hermetic,” he says. “You always can find a bridge.”