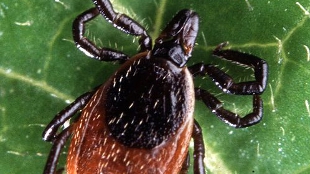 Adult deer tickWIKIMEDIA, SCOTT BAUER, USDAThe hypothesized link between autism and Lyme disease loses ground with a new study that found no evidence of an infection in patients with the social development disorder. The results, published today (April 30) in the Journal of the American Medical Association, imply that antibiotics against the Lyme disease pathogen—a popular new strategy for autism—will not ameliorate most patients’ symptoms.

“The data don’t address whether a single case of autism was ever caused by Lyme disease, but it rules out the suggestion that it does so with any frequency,” said Armin Alaedini, an immunologist at Columbia University Medical Center in New York and an author on the study. “I think that for me, this is the end of looking into the link between autism and Lyme.”

In recent years, some doctors have anecdotally noted that many of their autism patients have...

To systematically assess the prevalence of Lyme disease among people with autism, Armin Alaedini, an immunologist at Columbia University Medical Center in New York, and his colleagues analyzed blood samples from 120 children and teens: 70 participants had autism, and 50 served as healthy controls. Alaedini looked for antibodies against the bacterium underlying Lyme, Borrelia burgdorferi, and found that not a single participant tested positive for the infection.

“This means that you wouldn’t see 20 percent of children with autism getting their disease from Lyme,” Alaedini said. He entered into the study objectively, he said, wanting to explore a correlation that had gained traction among doctors and the public. “Autism has become a hot topic, and a lot of people are publishing findings that are bogus but still alarm parents.”

John Halperin, a neurologist at Mount Sinai School of Medicine in New York, called the study “well-powered to test the hypothesis” that a significant number of autism cases are attributable to Lyme disease. Halperin approves of the manner in which the authors searched the participants’ blood for Lyme disease—a two-tier test involving an ELISA test to detect antibodies against B. burgdorferi bacteria, and a Western Blot test to confirm them. “Several studies show that the test’s sensitivity is 99 percent and the specificity is close behind that, which is as good as any antibody test out there,” Halperin said. But the test has been a point of controversy for the outspoken advocates of chronic Lyme disease, in which a range of symptoms, such as fatigue and pain, persist for years after the infection is no longer detected—a condition largely dismissed by many scientists. Chronic Lyme supporters argue that the that the two-part test, validated by the American Lyme Disease Foundation and the Center for Diseases Control and Prevention (CDC), frequently misses a current or former infection.

Indeed, due to a mistrust of the CDC-recommended test, some proponents of Lyme-induced autism are not convinced by this study. “I’m glad to see that someone has decided to pay attention to this, but the study was designed to fail,” said Robert Bransfield, a psychiatrist in Red Bank, New Jersey, who writes about the connection between autism and Lyme disease. Bransfield points to studies showing that the test is insensitive. But Alaedini counters that the insensitivity occurs only in the first 1 or 2 weeks after a tick-bite, before a person has generated sufficient antibodies against the pathogen. This short-term problem would not be an issue in a study assessing long-term problems associated with autism, he said.

In addition to his doubts about the test Alaedini used, Bransfield speculated that Lyme disease might have caused autism while the participants were in the womb or in their first 2 years of life. The antibodies lingering from the causative infection may have waned by the time blood samples were collected. “If someone is a teen, even if they acquired autism from Lyme disease, you won’t see an active infection,” he said.

But Halperin said such a scenario is unlikely. “There is no scientific evidence to support those conjectures,” he said, calling them “fictional arguments that can’t be tested by science.” So, why do some children with autism appear improve after a bout of antibiotics? Like so many aspects of autism, that question remains open from a scientific perspective.