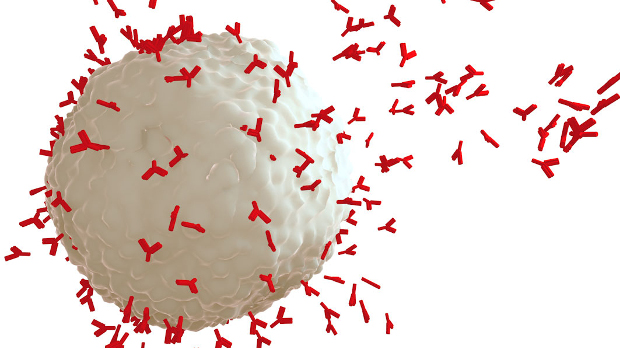 Antibody-producing B-cellsV. ALTHOUNIAN, SCIENCE TRANSLATIONAL MEDICINEA type of B cell that produces the inflammation-inducing cytokine granulocyte macrophage–colony stimulating factor (GM-CSF) may be key to driving disease-causing inflammation and relapses in multiple sclerosis (MS), according to research published today (October 21) in Science Translational Medicine. The results of the study, in which researchers examined blood samples from MS patients, suggest a possible mechanism as to why B cell-targeted therapies have been found to be efficacious for the disease.

“This is an important paper and among the first to study the role of B cells in MS, which has predominantly been studied from a T cell perspective,” said Claudia Mauri, a professor of immunology at the University College London who was not involved in the work.

In MS, immune cells attack the protective myelin coating that surrounds nerve fibers that branch out from neurons, leading to difficulties in...

Previously, antibody-mediated depletion of B cells was shown to reduce new inflammation in patients with relapsing MS. Recent clinical trial results showed that the anti-CD20 antibody, ocrelizumab, significantly reduced new CNS inflammation and relapse in MS patients and progression in those with gradually worsening disease. “The [positive results] of this antibody treatment are surprising and this paper may show why this treatment works so well in people,” said Ari Waisman, a professor at the Medical University of Mainz in Germany, who penned an accompanying perspective.

While B cells are best known for making antibodies, the benefit of B cell depletion in limiting MS relapse is likely unrelated to this function since the abnormal antibodies present in the spinal fluid of MS patients do not change following the effective B cell depletion therapy, according to study coauthor Amit Bar-Or, a neurologist and neuroimmunologist at the Montreal Neurological Institute and Hospital in Canada. To study the role of B cells in MS beyond antibody generation, Bar-Or and his colleagues analyzed B cells extracted from blood draws of 35 MS patients and 35 healthy volunteers. The researchers identified a population of memory B cells that expressed GM-CSF and were more frequent and active in the blood MS patients compared to that of controls. These B cells derived from MS patients could also stimulate a switch in macrophages to become proinflammatory, which is thought in turn to activate MS-promoting T cells.

In the blood of MS patients, depleting B cells with another anti-CD20 antibody, rituximab, resulted in detection of more macrophages that were anti- rather than proinflammatory. Sampling blood in these patients after their B cell pool had been repopulated revealed both a persistent reduction in the number of detected GM-CSF producing B cells and an anti-inflammatory effect on macrophages suggesting a shift in the balance between anti- and proinflammatory immune cells that might provide a benefit for MS patients. “It appears that in addition to removing pro-inflammatory B cells, both the B cells generated after therapy and the macrophages are less inflammatory,” Bar-Or told The Scientist.

The team also uncovered the signaling mechanism that underlies the generation of the GM-CSF expressing B cells, which could be useful for identifying targeted approaches to selectively inhibit these cells, according to Bar-Or.

While these cells appear to play a potentially important role in the disease, these results do not show that these B cells are pathogenic or causative in MS, Anne Cross, a professor of neurology at the Washington University School of Medicine in St. Louis who studies the pathology of MS using mouse models but was not involved in the work, noted in an email.

The study raises many questions on the pathogenesis of MS and immune function in general. Cross said she would like to see whether the disproportionate presence of this GM-CSF-producing B cell subset may be a general characteristic of other autoimmune or inflammatory diseases. Bar-Or and his colleagues plan to investigate this question, as well as whether these cells may be a useful biomarker for MS relapse.

Another question, according to Mauri, is whether these newly identified cells produce other cytokines and signaling molecules. How these B cells potentially influence the activity of MS-promoting T cells is also not clear. “The immune system is very complex. All cells communicate and influence each other in a tissue-dependent way,” said Mauri. “This study should raise more interest for other researchers to study the role of B cells in immune diseases.”