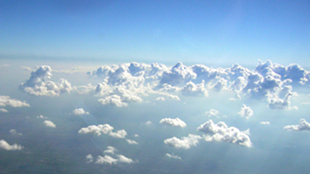 Wikimedia, Jessie EastlandTen kilometers (more than 6 miles) into the atmosphere, a plethora of microbes is thriving, possibly affecting cloud chemistry and playing a role in atmospheric conditions, according to new research published today (January 28) in Proceedings of the National Academy of Sciences.

“It’s the most exciting paper I’ve seen published this year,” said Jessica Green, a microbial ecologist at the University of Oregon, who was not involved in the research. “It contributes significantly to the hypothesis that the atmosphere is alive. . . . The possibility of microbes being metabolically active in the atmosphere transforms our understanding of global processes.”

Previous research on snow and rainwater collected at high elevations had already established that bacteria in the air initiate moisture condensation that leads to precipitation. Some of these microbes secrete special proteins that allow them to initiate ice crystallization, which may affect weather by changing...

To get a better glimpse of bacteria in the atmosphere—before they’ve fallen to earth— Konstantinidis and collaborators teamed up with NASA to collect atmospheric microbes. GRIP planes collected air from 1 to 10 kilometers above the ocean in August and September 2010, when Hurricanes Karl and Earl were brewing. Using DNA sequencing, the researchers identified a wide variety of bacteria, more than 60 percent of which were still viable despite the inhospitable conditions. The researchers found that the composition of the bacterial communities in the clouds differed before and after the hurricanes, suggesting that the storms whipped up bacteria from the Earth’s surface. They also noted some species known to be ice nucleators.

Theoretically, ice-nucleating bacteria could affect the number of and size of ice crystals formed in the atmosphere, possibly impacting the lifetime of clouds and even global climate. “If bacteria could reduce the number of high level clouds, it would allow more heat to go into space,” explained senior author Athanasios Nenes, an atmospheric at Georgia Tech, possibly cooling the earth.

But clouds have an “ambiguous” effect on the Earth’s temperature, noted Anne-Marie Delort, an atmospheric chemist at the Institute of Chemistry of Clermont-Ferrand in France, who was not involved in the research. Clouds can make the planet colder by blocking the sun’s radiation, or can have a greenhouse effect by preventing the Earth’s heat from dissipating, so it’s not entirely clear whether bacteria would promote warming or cooling, she said.

More information about how the bacteria might be interacting with cloud chemistry—possibly by looking at gene expression—will be important to understand the ways in which atmospheric bacteria impact weather, said Delort. Many qualities, such as hydrophobicity and metabolic activity, affect how bacteria might interact with clouds.

Recreating the dynamic conditions of the rapidly dissipating and reforming cloud environment will be difficult, said Allan Konopka, a microbial ecologist at Pacific Northwest National Laboratories who was not involved in the research, but “the idea of addressing whether bacteria are metabolically active could really shift how atmospheric chemists think about [cloud] reactions.”