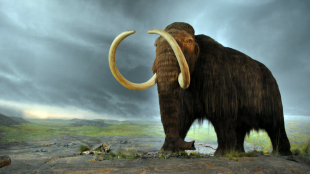 Bacteria are known to take in long fragments of DNA, discarded by the dead cells of other organisms, and incorporate them into their own genomes. Results published today (November 18) in Proceedings of the National Academy of Sciences show that bacteria can also integrate short and damaged stretches of DNA, even 43,000-year-old fragments extracted from a woolly mammoth bone.

Short, degraded DNA is abundant in the environment, “and if that can be used for transformation or mutagenesis, that suggests it has a much larger evolution-driving role than previously ever realized,” said Hank Seifert, a microbiologist at Northwestern University who was not involved in the study.

Natural genetic transformation, a form of horizontal gene transfer, is the process of gobbling up chunks of other organisms' DNA present in the environment. This genetic appropriation is thought to be important in bacterial evolution and antibiotic resistance, and recent...

“It's been an assumption that short, degraded DNA is not relevant” to natural transformation, said Søren Overballe-Petersen, a postdoctoral researcher at the University of Copenhagen and the study’s lead author. But longer fragments—say, a kilobase in length—don't last very long in the environment, limiting the opportunities for bacteria to take them in. Shorter stretches of DNA, however—tens of base pairs (bp) long—can persist for hundreds of thousands of years. The researchers wanted to see whether these, too, might have some relevance in natural transformation.“What are the odds of nothing happening?” asked Overballe-Petersen.

To find out, he and his colleagues knocked out two genes in Acinetobacter baylyi and presented the bacteria with DNA of varying lengths, from 20 to 50,000 bp. The researchers found that uptake of the DNA was more frequent for longer stretches of DNA, but that the bacteria could also grab units tens of bp in length. It didn't matter if the DNA was damaged, either. Offering the bacteria DNA with nicks, gaps, or other injuries didn't change the frequency with which they usurped the sequences. “To our surprise, [DNA damage] had little impact on the transformation. The length of the DNA is the major defining characteristic” of DNA uptake, Overballe-Petersen told The Scientist.

“It's a promiscuous process,” said Howard Ochman, an evolutionary biologist at the University of Texas at Austin. However, he pointed out that the bacteria used for this study had two genes knocked out. “How often [transformation by degraded DNA] occurs in nature, we don't know,” he said. “It's definitely a possibility, but they had to do some genetic manipulations to get them on the charts.”

Overballe-Petersen's findings suggest that the time-scale of natural transformation is no longer limited to the short lifespan of long, intact DNA fragments in the environment. To see how far they could theoretically stretch the time frame for natural transformation, the researchers extracted degraded, 43,000-year-old DNA from a woolly mammoth bone. Again, their experiments showed that the modified A. baylyi would plug it into their genomes. “As long as there's any DNA left, there's a possibility for genetic transfer. And as some DNA lasts for thousands of years, we have an extended time frame of what's happening,” said Overballe-Petersen.

Seifert said the study is the first to show experimentally that bacteria can by transformed by damaged DNA. “It's still an open question whether this is a characteristic of some transformable bacteria or all,” said Seifert, who was not part of the study.

Rosemary Redfield, a microbiologist at the University of British Columbia, said the study opens up new questions about the massive amounts of degraded DNA all around us—on shower curtains, in the soil, at the bottom of ponds. “Nobody's really thought about old DNA. It's always been new, intact DNA,” said Redfield, who was not involved in the study. “It's quite new to think about ancient DNA and what kinds of processes would happen to it.”

Overballe-Petersen proposes that the integration of these short fragments happens by a passive mechanism, one that pre-dates the process by which bacteria take up longer DNA fragments. Transformation usually ropes in the activity of around 40 different proteins, but when Overballe-Petersen's team knocked out RecA, a recombinase essential to the process, the bacteria still incorporated the short stretches of DNA. “It's a simple variant of the highly evolved, classical transformation,” he said.

It's possible that transformation by degraded DNA is important in bacterial evolution, he added, but it will be difficult to show just how often this occurs in nature. Redfield pointed out that the study found the rates of natural transformation of short fragments of DNA to be very low, close to the frequencies of random mutations. Overballe-Petersen said the process is akin to rummaging through the garbage can. Sometimes the bacteria will get cut by a piece of broken glass, but “once in a while, you'll strike gold.”