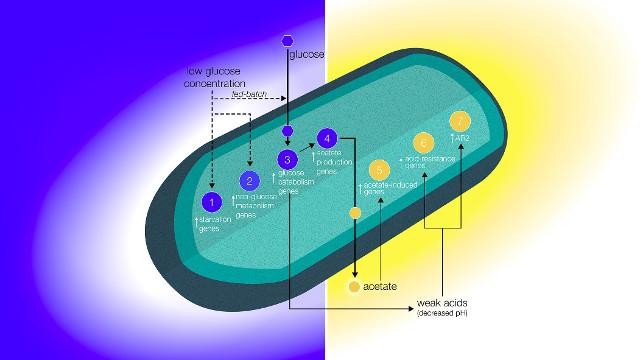 Biomolecular model based on the gene expression data analyses support the reduction of glucose molecules (blue gradient) and acid buildup (gold gradient) proposed to occur in the boundary layer around the cell. This altered extracellular environment has been hypothesized to result as an effect of reduced gravity-driven forces acting on the cell-fluid system and has been put forth as the biophysical mechanism governing bacterial behavior in space. Blue circles indicate overexpression of genes associated with metabolism, while gold circles represent the overexpression of acidic condition genes.PLOS ONE, L. ZEA ET AL.Ever since scientists began experimenting on bacteria in space, they’ve noticed that the bugs behave differently in extraterrestrial environments than they do on Earth. “Throughout the decades, we’ve seen different behaviors, including enhanced growth, improved biofilm formation, increased capability to cause disease in some cases, and a reduced susceptibility to antibiotics,” said Luis Zea, a research associate...
One idea that has been proposed is that microgravity indirectly changes the bacteria’s physiology. It’s an idea that Zea and colleagues probed in a study published this month (November 2) in PLOS ONE.
Zea’s team sent test tubes of E. coli up to the International Space Station (ISS) via Orbital ATK’s Cygnus spacecraft, though not without a few delays. The launch was pushed back on three separate occasions because of bad weather, a broken ammonia pump on the ISS, and high levels of space radiation. (Launching any experiment into space naturally comes with a few added challenges. “One of the hardest things to get is astronaut time,” Zea told The Scientist. “They’re very busy and have a lot of experiments going on so when you design your experiment, you want to keep in mind to minimize how much astronaut time you’re going to request.”)
Once the bacteria left Earth, astronauts at the ISS introduced the microbes to growth media. Nineteen hours later, antibiotics were introduced to the media. After another 30 hours, the astronauts stopped the experiment by adding a fixative solution to the mix. Meanwhile, researchers conducted this same process with E. coli on Earth. Once the space-traveling tubes were returned from the ISS to Earth, Zea and colleagues examined the differences in gene expression between the extraterrestrial-experimental and control samples.
The researchers found that, compared to the bacteria grown on Earth, the bacteria from the ISS showed increased expression of genes involved in starvation and acid resistance. Both could be explained by changes in the space-travelling bacteria’s environment. On Earth, gravity helps create flow in a solution, causing molecules in a solution to move around. But in space, under conditions of microgravity, molecules can only move through diffusion—a passive and much slower process.
In space, once the bacteria used up the nearby nutrients, those nutrients could only be replaced by diffusion through the growth media. And when that didn’t happen quickly enough, the microbes’ starvation-response genes were increasingly expressed. Similarly, once the space-traveling bacteria released their metabolic byproducts into the surrounding media, diffusion couldn’t wick them away as quickly as gravity-induced flows did on Earth. This created an acidic environment around the bacteria, activating the microbes’ acid-resistance genes.
“This is the first and a big first step, I think, to understanding exactly how microgravity affects microorganisms by changing the environment,” said Rocco Mancinelli, a senior research scientist with the Bay Area Environmental Research Institute at the NASA Ames Research Center who was not involved in the study. “This points quite nicely to the mechanisms of those environmental changes down to the genetic level.”
“This certainly adds to our knowledge of microgravity issues with starvation and mass transport,” said Robert McLean, a biology professor at Texas State University who also was not involved in the study. “It’s very intriguing.”
The next steps for understanding how bacteria behave in space is to look at multiple species grown together. “The focus should be on bacteria growing in mixed cultures,” said Rosenzweig.
McLean would also like to see these findings investigated alongside other proposed explanations of bacterial behavior in microgravity. “I have a feeling more than one factor is going to be involved,” he said.
L. Zea et al., “A molecular genetic basis explaining altered bacterial behavior in space,” PLOS ONE, doi:10.1371/journal.pone.0164359, 2016.