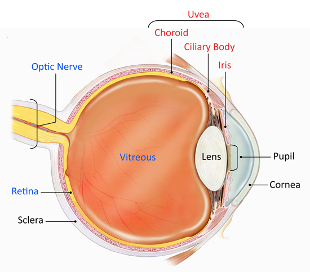 NATIONAL EYE INSTITUTEGut bacteria may provide the trigger for autoimmune uveitis, a destructive inflammation of the eye, researchers at the US National Eye Institute (NEI) reported in a study published today (August 18) in Immunity. Autoimmune uveitis is a painful condition that can lead to debilitating blindness. It often hits adults 20 to 60 years old, and is responsible for up to 15 percent of all blindness and severe visual impairment in developed countries.

Researchers believe activated retina-specific T cells attack the eye, causing the inflammation, but the antigen that activates those T cells lies inside the normally immune-privileged eye, meaning T cells are not able to circulate in that area. How those T cells become activated without exposure to the eye has been poorly understood. The NEI’s Reiko Horai, Rachel Caspi, and their colleagues used a mouse model prone to developing uveitis and found that...

“It’s the first study to show the potential of the microbiome to induce an autoimmune disease specific to the eye,” said Andrew Taylor, an ocular immunologist at the Boston University School of Medicine who was not involved in the research.

The team also found that the model mouse intestines showed high levels of interleukin-17A, a proinflammatory cytokine produced by T cells. In another experiment, the researchers administered a wide-spectrum antibiotic cocktail to the mice in an effort to reduce the gut microbiome. The antibiotics appeared to slow the development of uveitis in the mice and reduce the number of activated T cells. The researchers also found that microbe-rich extracts from model mouse intestines activated retina-specific T cells.

“It’s been known for other autoimmune diseases that gut bacteria can provide a necessary component, but the mechanism wasn’t known,” Caspi told The Scientist. “What appears to be happening is that they make some substance that, to the T-cells, looks like a protein from the retina.”

The researchers were unable, however, to identify the specific proteins or the bacteria that might produce this substance, which Caspi noted was a limitation of the study. It may be that a combination of bacteria work together to trigger the retina-specific T-cells, making the task of identifying the responsible proteins and bacteria even more challenging, she added.

Caspi said the team plans to continue to isolate the specific bacteria and/or proteins involved in activating the retina-specific T cells. “We don’t know what that actual protein is and I don’t know how long it will take to find it,” she said. “It may that we have to search far and wide for this mimic.”