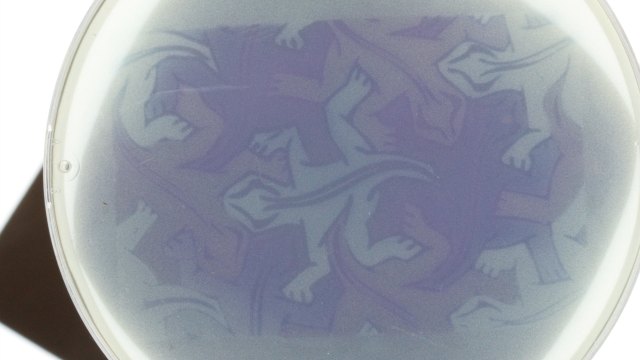 FELIX MOSERMore than a decade ago, MIT researchers, led by biological engineer Christopher Voigt, engineered bacterial cultures to produce black-and-white photo negatives mirroring patterns of light projected onto the dish. Augmenting the cells to sense light and produce black pigment in response required only four genes. Now wielding a suite of 18 genes, Voigt’s team has created a microbial color palate that can paint a fruit still life, a geometric lizard motif, and a leaping Super Mario. The results appear in Nature Chemical Biology today (May 22).

“We think of it as sort of ‘disco bacteria,’” Voigt said. “You can imagine different light flashing depending on what the cells need to do.”

To engineer bacteria that react to certain wavelengths of light by producing a particular pigment, Voigt’s team leveraged several cutting-edge pieces of technology, including optogenetic laser light sensors, CRISPR-based gene-expression control, and the lab’s very own... 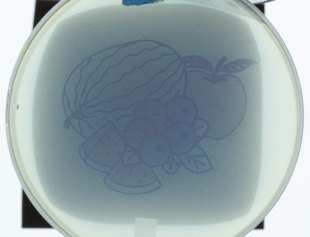 FELIX MOSERWavelength-specific light sensor molecules studding the surface of the cell switched on, activating dedicated genetic circuitry that ultimately spit out a desired product. In this “photography” experiment, the products were pigment molecules of the same color as the light input—red, green, or blue—which caused the bacterial photo paper to mimic the image projected upon it.

The utility of the system goes beyond making pretty pictures. Light is useful for directing bacterial activity because, unlike chemical signals, light can be used remotely, it’s easy to turn off, and it offers tight spatial and temporal control, Voigt said. “You just wouldn’t be able to do that with chemicals,” he said. “It would be very expensive and just technically challenging.”

Voigt said his team designed this project almost like they were putting together a Lego Mindstorms kit. Like the popular robotic building toy, Voigt’s system is composed of many modular pieces of technology that work together to produce behavior, but unlike Legos, assembly was not trivial.

According to Duke bioengineering professor Charles Gersbach, the complexity of Voigt’s system is unprecedented. He was impressed that a system with so many moving parts wouldn’t fall victim to interference.

“You can’t just grab those things and put them together and then expect them to work the way you want them to,” Gersbach said. “They had to do a lot of tweaking and dialing of the system up and down and also making sure all the parts were compatible with one another.” 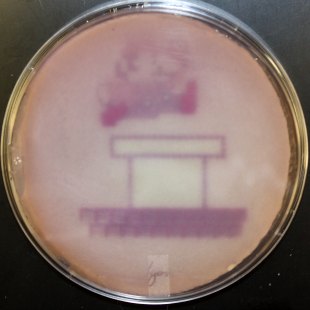 FELIX MOSERSuch a complex engineering feat is testament to how far the field of synthetic biology has come, Gersbach said, and programming biological systems in space and time is sure to have many interesting applications, such as in drug delivery or regulating the microbiome.

One of the next challenges Gersbach imagined is expanding this color-controlled bacterial production system from the planar culture dish to the 3D world. Voigt’s group is already working toward this goal by marrying 3D printing with the system laid out in their most recent paper. Under this mechanical-biological collaboration, the arm of a traditional 3D printer would control the higher-order structure of the output while at the same time bursts of colored light would instruct the engineered bacteria which material—metal, protein, plastic, etc.—to lay down.

For Julius Lucks, a bioengineer at Northwestern University, Voigt’s system shows promise as a broadly-applicable tool for understanding and controlling gene expression in a temporally-precise and noninvasive way.

“We can do a million things with light,” Lucks said. “Here the big thing is having three wavelengths of light. That’s a lot of knobs.”