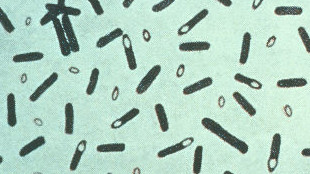 Clostridium botulinumWIKIMEDIA, CDCChanges to the microbial composition of the gut can drastically alter the development of certain bowel tumors, according to a study published today (March 3) in The Journal of Experimental Medicine. Researchers from New York City’s Icahn School of Medicine at Mount Sinai worked with a mouse model that develops tumors called serrated polyps in the cecum, the part of the large intestine proximal to the colon. The polyps arise in part because the mice are genetically engineered, via a pair of transgenes, to overexpress the growth factor HB-EGF. But genetics, the researchers found, are not the whole story. Their work revealed that bacteria are also required for tumor development—the ceca of transgenic mice raised on an antibiotic cocktail did not form polyps.

“We were able to show that tumor formation was dependent on the microbiota present in that particular area of the intestine,” said...

“This study adds to our knowledge of links between the gut microbiome and colon cancer, where causation is now established in several animal models and correlations are intriguing in humans (although causation in humans are not yet proven),” Rob Knight, a microbial ecologist at the University of Colorado, Boulder, who was not involved in the work, told The Scientist in an e-mail.

“There’s a growing body of information that constituents in the microbiota play a role in chronic inflammation and in cancer development,” said Martin Blaser, a professor of internal medicine and microbiology at the New York University School of Medicine, who did not participate in the study. “This study supplies yet another model of the same phenomenon.”

Since researchers determined that the bacterium Helicobacter pylori can cause some stomach cancers, a growing body of evidence has suggested that certain bacteria influence cancer development.

After finding that antibiotics prevented polyp formation, the researchers tried feeding the antibiotic-treated mice stool from their untreated counterparts to determine if bacteria alone could reverse the effects of the drugs. After ingesting the gut bacteria from the untreated mice, the once germ-free mice developed polyps.

The researchers also transplanted early embryos of the transgenic mice into females of another, cancer-free mouse strain, Swiss Webster. Inoculated at birth with the bacteria of their surrogate mothers, these transplanted mice did not develop tumors until 25 weeks, whereas the genetically identical controls had tumors by 12 weeks. This showed that small changes in the gut microbiota could have a large influence on tumor growth.

When the researchers examined the animals’ bowels, they found both that bacteria had invaded the intestinal epithelium and that the connections between the epithelial cells—as indicated by the presence of cell adhesion molecules, including E-cadherin—were weakened where the polyps had formed, compared with adjacent tissue. Most of the tumor-dwelling bacteria belonged to the Clostridiales family, Lira said. The researchers also observed an upregulation of inflammatory molecules near the polyps.

One outstanding question, Lira said, is how microbes affect the intestinal epithelium: Do the bacteria make it more permeable or just capitalize on its pre-existing weak spots?

“We need now to go back and do longitudinal experiments throughout the development of the tumors to try to understand what is causing the permeability changes that we have observed,” he said.