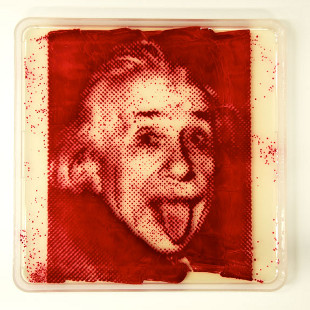 Albert Einstein, Courtesy of Zachary-CopferUp close, the crimson spots look like the ink-dots of a comic strip—precisely spaced bubbles in the bright areas that let a tawny background peek through—while a wash of red fills the shadows. But take in the blend of light and dark sections on the entire notebook-paper-size petri dish and the famous photo of Albert Einstein sticking out his tongue comes into focus. It’s one of the first “bacteriographs” Zachary Copfer, a microbiologist-turned-artist, created with his patent-pending method of developing living art with help from bacterial colonies.

“I love that picture. I love that it’s having fun with science,” says Copfer of the iconic Einstein image. “Everyone smiles when they see it.”

The former microbiologist took a job in a quality-assurance lab after studying biology at Northern Kentucky University but switched careers when the daily grind of industrial science stifled his scientific curiosity. Enrolling in...

“He started out by being a straight photographer, mostly architectural [photographs], which were technically brilliant, but relatively dispassionate,” says photography professor Jane Alden Stevens, fine arts program coordinator at Cincinnati. It was when he realized he could integrate his two interests, that he—and his art—came alive, she says.

In August of 2011, halfway through his MFA program, Copfer realized a connection between photography and bacterial growth: the process of exposing film reminded him of a lab exercise where he irradiated bacteria growing on a plate of nutrient-laden agar. Using tips from his girlfriend, a graduate student in the sciences, he contacted University of Cincinnati biologist Theresa Culley, who gleefully welcomed him into the lab. 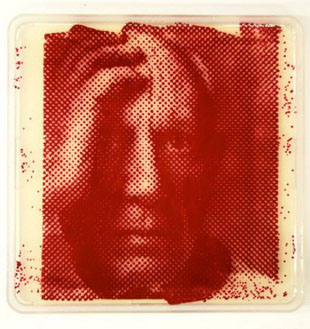 “I got really excited when I was talking with him,” says Culley, who comes from an artistic family and values creativity among her science students. “Here was this art student trying to look at the universe from an artistic perspective, using science.”

Culley gave Copfer bench space, some basic equipment, and keys to the lab. And the art student won a small grant from the university to cover the rest of the supplies. As his classmates shut themselves into their studios for soul-searching art projects, Copfer became a regular member of Culley’s lab.

But despite his setup, Copfer confronted the challenge of developing a completely new art form with living colors. “There was a long trial and error process,” he admits. After giving up on gloppy yeast cultures and finicky algae, he turned to the laboratory workhorse, E. coli, and the bright red bacteria, Serratia marcescens. After months of tweaking and fine tuning, Copfer perfected his method: grow a culture of bacteria; spread it evenly over an agar plate; overlay a photographic negative; expose the plate to UV radiation, to kill the bacteria in the light areas but preserve those in the dark areas; let the remaining bacteria grow; then fix the bacteria and seal it in acrylic.

The first successful bacteriograph was of a simple shaded circle, Copfer says. When it finally worked, “I was yelling and running around the lab, showing everyone,” he says. He soon moved on to Einstein, then to portraits of other creative geniuses: Pablo Picasso, Charles Darwin, and Leonardo da Vinci. 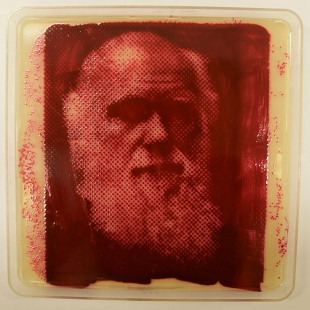 Charles Darwin, Courtesy of Zachary CopferScientists were quick to give thumbs up to the unique images, but some artists and critics had to get over the ick-factor of a large plate of bacteria. “People have this sort of bipolar relationship with bacteria,” Copfer says, “We attach them to death and take antibiotics like crazy and then we have to take probiotics and feed ourselves bacteria. But, you’re not going to get sick by looking at a plate of Serratia.” Some people are afraid of them, he adds, but some are mystified.

After graduating with his MFA this past spring, Copfer is now working on becoming an art teacher and striving to craft pieces in which his bacteria "speak more." His newest project explores the microbial communities on people’s faces, an assemblage he describes as an abstract biological trace, unconcerned with our trifling human differences. Stevens hopes his future works will find a fine art audience in galleries that focus on visible techniques and unique artistic processes.

Moreover, Stevens, Cullen, and Copfer hope that the work will highlight the bridge between science and art. “There’s a theory that art and science use two different parts of the brain,” Culley says. But to be a good scientist—and a good artist—she notes, you have to be creative and think outside the box.