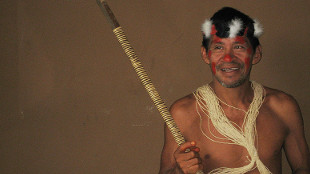 Waorani LeaderWIKIMEDIA, KATE FISHERAmerican biomedical researchers working in Ecuador have met with hostility and distrust in the aftermath of announcements last year that the country plans to sue researchers at Harvard University and the Coriell Institute for Medical Research over blood samples allegedly taken without the Ecuadorian government’s permission during the early 1990s. Representatives of the Waorani indigenous people claim that researchers collected cell lines and DNA samples under false pretenses and distributed them to scientific labs in other countries, which is in direct violation of Ecuador’s biopiracy laws. Public reports about the alleged genetic heist have riled Ecuadorians, which has led to a backlash for all researchers trying to do genetic and public health research in the South American country.

“We directly experienced suspicion,” said biological anthropologist Mark Sorensen of the University of North Carolina, who studies childhood disease in Ecuador. Though he was not involved in...

The case was brought to the government’s attention in 2010 when a representative of the Waorani people, an indigenous group of approximately 4,000 people from the Amazonian region of Ecuador, filed a complaint with the government. The report detailed a 1991 incident, in which two medical researchers from Harvard University—with the help of an oil company liaison—drew blood from Waorani people, allegedly making off with 36 DNA samples and seven cell lines, without proper consent and under the false pretense that the samples would be used as part of a medical exam. The report also notes that the researchers’ work coincided with vaccination campaigns, which may have led participants to incorrectly associate the blood draws for research with public health efforts.

The report goes on to claim that the researchers brought the samples back to the United States, and by 1994 transferred them to the Corriell Institute of Camden, New Jersey, which hosts a repository for biological samples. Corriell, the complaint alleges, then sent the samples to researchers in eight different countries to study the distinct tribe’s genetic variation.

In a statement, Corriell claimed that it “received no commercial benefit associated with the receipt, storage, or distribution of these specimens,” and that the samples were removed from their repository in 2010. And Harvard Medical School released a statement saying that it was unaware of the pending lawsuit and the details surrounding the case.

Undeterred, the Ecuadorian ombudsman office has opened an investigation and claims to have gathered witness testimony to support its accusation that the researchers violated Article 66 (3)(d) of the Ecuadorian constitution, which prohibits “the use of genetic material and scientific experimentation that undermines human rights.” So far, however, no lawsuits have been filed.

Amid the continuing investigation and pending lawsuits, researchers like Sorensen are waiting out the storm before they restart their work in Ecuador. And going forward, he plans to be highly conscientious of consent protocols and to forge stronge collaborations with study populations before taking their samples. “Some researchers haven’t been careful at explaining [genetic] sampling,” he said. “[This is] clearly a big concern.”