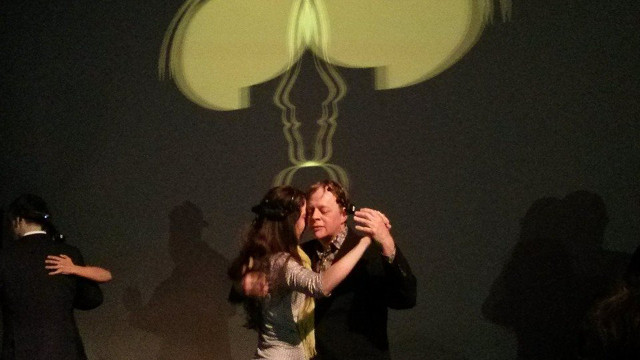 Dancers perform at “NeuroTango,” held in Brooklyn, New York, this week.ELI CHENDancing with someone for the first time involves a great deal of uncertainty. At first, new dance partners watch their feet nervously, unsure of where to step. But with time, rhythm and flow can develop between them. Eventually, it might seem as though they’ve known one another for years and can predict their partner’s moves.

It’s not fully known what makes two people click. But some researchers are working to understand how human brains can operate in sync. Suzanne Dikker, a cognitive neuroscientist at New York University, is one such researcher, and she’s using partner dance to unravel the complicated neuroscience behind such interpersonal “chemistry.”

“Humans are always trying to gauge compatibility and connectedness,” says Dikker, “so we know who we want to work with and who we don’t. Our survival is dependent on how we...

Dikker staged an event in Brooklyn, New York, this week (March 26) to demonstrate what brain synchrony might look like between dancers. With “NeuroTango,” which was hosted by the Greater New York City Chapter of the Society for Neuroscience as part of its Brain Awareness Week, Dikker hooked up two pairs of tango dancers with EEG headsets to measure each person’s brainwaves. She then performed three experiments.

First, the previously acquainted pairs danced to a song like they normally would. Then they switched partners to dance with someone they were less familiar with. After that, the dancers stood in place with their initial partners and imagined they were dancing. All the while, Dikker projected graphics and numerical scores onto the walls of the room, depicting when the dancers’ brains were in sync, and when they were less so.

Dikker is using tango to study brain synchrony for a couple of reasons. For one, she finds the interactions between two tango dancers fascinating because of the amount of coordination it takes to make complicated movements look natural and instinctive.

“Tango is interesting and complex to study because depending on whether you’re a leader or a follower, there are different brain states involved in anticipating what your partner will do,” says Lawrence Parsons, a cognitive neuroscientist at the University of Sheffield. Parsons conducted the first neuroimaging study on dancers, in 2008, to discover which parts of the brain were most active in dance.

Beyond exhibiting performance art, with “NeuroTango” Dikker sought to test whether EEG could be reliably used to study moving interactions in real time. She had previously worked on Marina Abramovic’s performance piece, “Measuring the Magic of Mutual Gaze,” which was featured at the Garage Center for Contemporary Culture in Moscow in 2011. As part of that installation, participants were asked to sit still and make eye contact with strangers for prolonged periods of time, as EEG headsets captured their brain activities. The brainwave data Dikker collected from Abramovic’s piece were what inspired her to devise NeuroTango—she wanted to compare the EEG’s reading on stationary versus mobile subjects.

However, brainwave data is best collected in the absence sound or movement, and it’s well known among neuroscientists that portable EEGs can be hypersensitive.

“I’m cautious because the subjects’ movements and the audience presence could create noise in the data,” says Lewis Hou, a research associate at the University of Edinburgh, who’s leading a project to discern what’s happening in the brains of Scottish folk dancers. From a science communication standpoint, however, “I think this is event is a fantastic way to engage the public in neuroscience,” he adds.

Dikker also hoped to explore how each dancer’s level of experience played into synchronization. One pair of dancers had known one another for 17 years, while the other had only been dance partners for six. Ivana Konvalinka, a cognitive neuroscientist at Technical University of Denmark, wondered what Dikker’s preliminary data might show about what happens in dancers’ brains while they’re imagining movement, and how that might relate to his or her level of expertise.

“Studies have shown that experienced dancers coordinate their movements very differently than those who aren’t,” says Konvalinka. “[The] premotor cortex, which is activated while dancing, is also highly activated even when they’re just rehearsing in their heads.”

While technological limitations make these questions a challenge to investigate, “NeuroTango” nonetheless provided a glimpse into a small but growing field in neuroscience that’s diving deep into the mysterious space between two people.

Corrections (March 28): This article has been updated to more accurately reflect Suzanne Dikker’s current affiliation, and to correct when and where Marina Abramovic’s “Measuring the Magic of Mutual Gaze” was featured. A previous version incorrectly stated Abramovic’s piece was featured in New York City last year. It was in fact featured in Moscow in 2011. The Scientist regrets the errors.