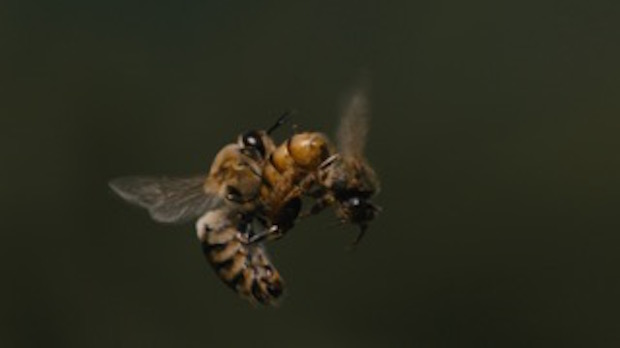 STILL FROM THE MOVIE MORE THAN HONEY, COURTESY OF BORIS BAERMale honeybees protect their queens from a sexually transmitted disease (STD) by fortifying their seminal fluid with antimicrobial protein and small molecules, according to a study published this week (January 20) in Proceedings of the Royal Society B. The defense molecules appear to specifically target the fungal pathogen Nosema apis.

N. apis infection is “not the super-killer, but beekeepers . . . increasingly report that they have trouble with that disease,” said study coauthor Boris Baer of the University of Western Australia’s Center for Integrative Bee Research. At a time when a variety of pathogens and changing climate threaten bees, Nosema may simply be the final straw for a given colony.

“What I quite like about [the paper] is that they use different methods to really point at the actual potential protein or molecule that might...

Next, the researchers separated proteins and smaller molecules from the seminal fluid, finding that the protein fraction and the small molecule fraction could kill spores each on their own. The spores in the protein fraction appeared to prematurely germinate, rupturing within the seminal fluid. Nosema spores reproduce by rupturing when they contact bee tissue and inserting their genetic material into the bee cells. By causing the spores to germinate prematurely without any host tissue nearby, the bee seminal fluid was able to kill them. The researchers suspect that some protease or chitinase may attack the spores’ cell walls. In contrast, spores incubated with the small molecule fraction of the seminal fluid died without rupturing.

It makes evolutionary sense that male bees should have STD defenses, said Baer. Queen bees mate with 25 or more male drones over a short period of time and then store ejaculate for the rest of their lives. “Typically, animals that mate with many males have a higher risk of sexually transmitted diseases,” Baer said.

It’s in the best interest of the male bees to protect the queen from disease. The queen is the only individual a given drone will mate with over his short life. “If a male transmits a pathogen, it’s the death of his line,” said Otti.

To test whether the bee’s seminal fluid had general antimicrobial activity, the researchers observed its effects on Escherichia coli, yeast, and Arthrobacter globiformis—a soil bacterium. The two bacterial species and the yeast were unharmed by the seminal fluid.

Bees may have evolved highly specific defenses against N. apis, the researchers noted in their paper. It is also possible that their seminal fluid is active against some other pathogen that has not yet been tested. Otti pointed out that, unlike N. apis, the additional pathogens the researchers tested are not adapted to bees in particular. “These three pathogens are more . . . opportunistic pathogens.”

Baer said he hopes to further investigate bees’ natural pest defenses, with a focus on chemical-naive bee populations that have evolved their own defenses. If it does turn out that some bees have specialized defenses against pathogens, it may be possible to breed bees with greater resilience against disease, or even make medicines for bees inspired by natural defenses. “The exciting thing is bees can defend themselves, and they can do that very efficiently,” said Baer. “I think that’s pretty good news.”