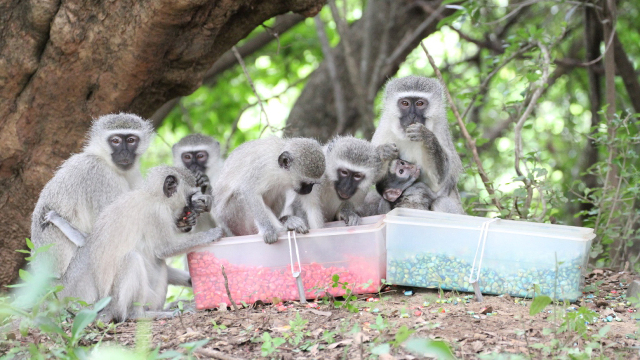 Signs of culture in monkeys and whales

Humans aren’t the only animals with culture, or the ability to collectively transmit and adopt behaviors among a group. Indeed, some level of cultural transmission and learning has been identified in several other species. But two studies published last month (26 April) in Science provide the strongest evidence yet, showing that vervet monkeys and humpback whales learn new behaviors from each other in much the same way as humans pick up the latest trend.

In the first study, researchers from the University of St. Andrews in Scotland created two distinct “cultures” among a group of more than 100 wild vervet monkeys (Chlorocebus pygerythrus) in South Africa: one set was trained to eat only corn dyed blue; another to eat only pink corn. Several months later, when...

In the second study, a different team from St. Andrews mined observational data on humpback whales (Megaptera novaeangliae) in Massachusetts Bay collected over 27 years to see if lobtail feeding—a technique in which the whales strike the water with their tales, most likely to confuse and herd prey fish together—was spreading, as anecdotes suggested. The researchers found that since 1980, when the feeding behavior was first spotted, it has spread to 37 percent of the population. What’s more, almost 90 percent of the whales that adopted the technique appeared to have learned it by copying a nearby whale that was already using the trick.

Carel van Schaik, a primatologist at the University of Zurich in Switzerland, told ScienceNOW that the publication of these two papers “marks the moment where we can finally move on to discuss the implications of culture in animals,” rather than debating whether or not cultural transmission occurs in animals. 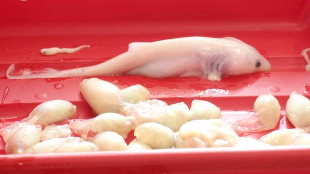 The smaller sand shark embryo (left) was retrieved from the throat of the larger one.DEMIAN CHAPMAN

Female sand tiger sharks (Carcharias taurus) often carry eggs fertilized by several different fathers in their 2 uteri. Only one shark emerges from each womb, however, each of which has grown big and strong by eating all of the other embryos. This process, known as “embryonic cannibalism,” was previously documented, but in a report out earlier this month (May 1) in Biology Letters, researchers have revealed that it plays a role in deciding the reproductive success of the males.

“For most species, we think of sexual selection as ending when males fertilize eggs, because once the male’s fertilized eggs he’s won . . .” Demian Chapman of Stony Brook University, who led the study, told The Washington Post. “This is demonstrating that embryonic cannibalism is actually whittling down the number of males producing offspring.”

Chapman and colleagues studied 15 pregnant sand tiger sharks that died after being caught in protective nets off beaches in South Africa. DNA profiling showed that the 5 sharks that had died in the early stages of pregnancy carried had eggs that had been fertilized by several different males. But both pups that remained in the twin uteri of the 10 sharks that were in the later stages of pregnancy were fathered by the same male.

Exactly what determines which of the males’ offspring makes it out of the uteri alive is not clear. Perhaps the embryos fertilized first have a headstart that helps win the bloody battle in the womb. However, it is also possible that some “fitter” males carry genetic material that produces faster-developing embryos that can overtake—and then devour—even those embryos fertilized before them. 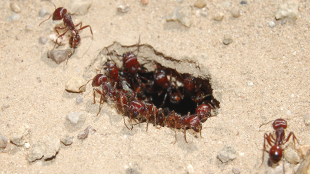 Harvester ants wait for interaction with returning foragers to decide whether to leave the nest.KATIE DEKTAR

Harvester ant (Pogonomyrmex barbatus) colonies that collectively restrain themselves from foraging for seeds when the weather doesn’t suit them are more successful than colonies that head out regardless of conditions, according research out this month (May 15) in Nature. “It’s the first study of how natural selection is acting on collective behavior in a natural population,” study author Deborah Gordon of Stanford University told the Not Exactly Rocket Science blog, which is hosted by National Geographic.

Harvester ant colonies regulate their foraging activity with a system of positive feedback interactions. In short, if outgoing foragers bump into incoming counterparts carrying food, they are more likely to venture out themselves—and vice versa. With every individual behaving in accordance with these rules, the collective adjusts the size of its foraging crews to suit the amount of food available.

Harvester ants live in the desert, so they need the water provided by seeds, but they lose water every time they head out across the sands, so it’s a delicate trade off. Gordon found that different colonies tackle the dilemma in different ways: some are less likely to forage when conditions are dry and there is an increased risk of death by dehydration, than others. Over the course of almost 30 years, the colonies that showed restraint during dry spells survived just as long as those that collected seeds in all conditions, but produced more offspring colonies.

This collective response to changing conditions appears to be heritable: although daughter colonies were distant enough from parent colonies to ensure the two could not interact, they made similar choices regarding when to forage. 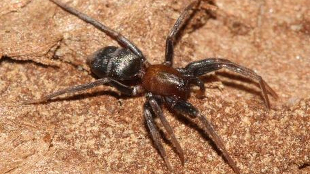 The Black Widow spider is so called because the females of the species are known to eat their male suitors after sex—an extreme form of selection in which less desirable males are ruthlessly taken out of the game. But a new study has shown that for another species, the roles can be reversed: male Micaria sociabilis spider gobble up females after, or even before, mating. Indeed, the research—published this month in Behavioral Ecology and Sociobiology—demonstrates that M. sociabilis males are more likely to eat females than be eaten.

A team from Masaryk University in the Czech Republic studied the behavior of pairs of males and females of various sizes, ages, and mating statuses thrown together in the lab. The spiders were well fed beforehand to discount hunger as the driver of any cannibalism witnessed. The researchers found that males born in the summer, which are larger than their spring-born counterparts, were more often cannibalistic. Moreover, cannibalism occurred most frequently when young summer-born males encountered older females from the spring generation, suggesting that for males, this extreme form of selection is based on age. Variations in female body size did not affect rates of cannibalism.

Regardless of the criteria, it’s clear that male M. sociabilis spiders assert their partner preferences in the most ruthless way possible, by devouring those unfortunate members of the opposite sex not deemed fit enough.