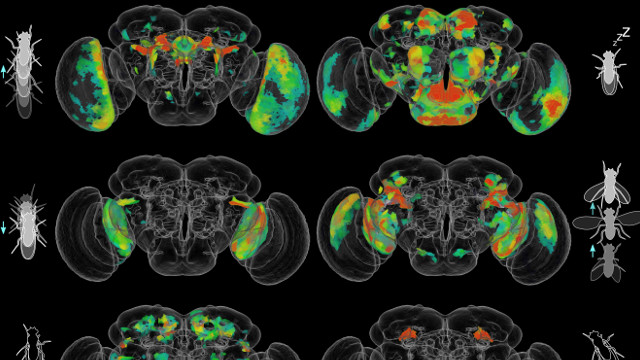 Examples of a few of these behaviors and their corresponding behavior-anatomy maps from Robie et al. KRISTIN BRANSON, JANELIA RESEARCH CAMPUSCompared with the billions of neurons within the human brain, that of the fruit fly, Drosophila melanogaster, contains about 250,000 neurons. Yet, even identifying the neuronal circuits that produce both simple and complex behaviors such as walking, jumping and courtship is difficult in the fruit fly using currently available tools. To make the study of the neuronal basis of behavior more tractable, Kristin Branson, a neurobiologist at the Howard Hughes Medical Institute Janelia Research Campus in Virginia, and her colleagues have created a large dataset of whole-brain neural maps that show the behavioral effects of activating subsets of neurons in the adult fruit fly brain.

The results of the work, which took six years to complete, are published today (July 13) in Cell. The study authors...

“This is an important paper and a really exciting resource for the neurobiology community that our lab definitely plans to use,” says Mala Murthy, a neuroscientist who studies acoustic communication behaviors of fruit flies at Princeton University and who was not involved in the work. “Which neurons function in what behaviors is still an open question. The general approach has been to study one neuron at a time. This full-scale approach is a very useful brain-wide tool that identifies specific brain regions linked to behaviors.”

Current neuroscience techniques such as electrophysiology or calcium imaging only allow low-throughput recording from a few neurons at a time, according to Branson.

“No one has developed whole-brain methods yet,” she says. Additionally, these techniques can only be used on flies that are not actively moving within their environment.

To begin such a whole-brain effort, the research team started with more than 7,000 so-called Drosophila GAL4 driver lines, each of which has one to several hundred neurons that express the genes for the GAL4 transcription factor and the corresponding GAL4-binding upstream activating sequence (UAS). This GAL4-UAS system drives expression of a temperature-sensitive cation channel that results in neuron firing at temperatures about 25 °C in the flies.

By raising the temperature of each fly line, the researchers can selectively activate the tagged neurons. To visualize the manipulated neurons, scientists label them with green fluorescent protein. Branson and her colleagues worked with 2,204 of these lines, each of which had relatively few neurons that would be activated in a single fly.

The researchers then systematically placed 20 flies from each line into a plastic dish, raised the temperature to active their neurons and captured their behavior on video for 15 minutes. The team created an automated machine-learning tool that could capture the movements and behavior of each fly line and compare these to wild type flies. The program cataloged the behaviors of 400,000 fruit flies over a total of 225 days of videos. The analysis included 203 fly behaviors such as flight, wing grooming, and attempted copulation.

From these videos, the team created detailed brain anatomy maps of the sets of activated neurons and their corresponding behaviors. In some cases, the researchers further refined their neuron-behavior links by conducting the same neuron activation and video recording experiments using split-GAL4 fruit fly lines in which smaller subsets of neurons in each fruit fly were activated.

“Branson and her colleagues have focused on solving fundamental questions about the neurobiology of behavior,” says Andrew Straw, a neurobiologist at the University of Freiburg in Germany, in an email to The Scientist. “This kind of interdisciplinary work, at the intersection of computer science and biology, is a great triumph, bringing intensive efforts together to achieve one grand vision.”

To drill down and even better define the specific neurons associated with these behaviors, will require more extensive analyses of the split-GAL4 lines, according to Murthy.

The new resource, according to Branson, is an unbiased look at the behaviors associated with specific subsets of neurons. “Whatever the behavior a neuroscientist is interested in, they can home in on the neurons associated with that behavior from these maps. We’ve spent a lot of time to make our data digestible for biologists,” she says.

Besides creating a searchable database for the science community, the team has also placed more than 20,000 short videos of the neuron-activation fly behaviors they observed on YouTube.

For Aravinthan Samuel, a neurobiologist and physicist at Harvard University who was not involved in the study, the enormous amount of data produced in this study demonstrates how “to tame a flood of data with imaginative computer science. [The authors] use the latest techniques in machine-learning and data analysis to efficiently organize and find structure in the inherently high-dimensional spaces of behavior and brain structure.”